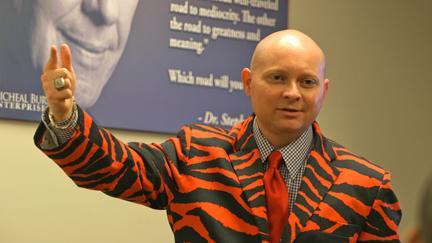 An entrepreneur, motivational speaker and author of nine books on how to improve businesses, Burt is embarking on a journey into the world of reality television to start the new year.

The pilot episode of Burt's reality show, "Zebras and Cheetahs," will air at 9 a.m. today (Jan. 1) on The CW Network on cable and satellite providers in the Nashville area.

Cameras were there earlier this year to chronicle a two-day leadership boot camp in the Nashville area in which Burt coached five contest-ants on "how to look different, run faster and be agile in today's concrete business jungle" - to turn them into zebras and cheetahs for 2014.

The show title harkens to Burt's latest book, "Zebras and Cheetahs: Look Different and Stay Agile to Survive the Business Jungle." It was co-written by Dr. Colby Jubenville, an associate professor in the MTSU Department of Health and Human Performance.

"What we're trying to do is find additional ways to bring the book to life," said Burt, a Woodbury native, who hopes the pilot leads to a full season of six to eight episodes. "When I call people zebras and cheetahs, what I'm really saying is that they distinguish themselves. They look different. They run faster or they jump on opportunity."
The MTSU ties don't end with Burt and Jubenville.

MTSU alumnus Brock Patterson, also an adjunct business communication professor in the Jones College of Business, is executive producer of the show. Other MTSU connections on the show's production include alums Rob Janson, director of photography, and Ty Whitaker, cameraman; and students Jacob Cleaver and John Martinez, assistant cameramen.

"The process was truly transformational, not only for the contestants, but for the rest of the staff," Burt said. "I had concerns going in if we could make it compelling enough … where a viewer would sit there and say, 'I want more of this!' It was a great experience."

To top it off, recent MTSU graduate Cody Hawkins of Gallatin, Tenn., is one of the five contestants featured on the show. Other contestants are Jason Goolesby of Alabama, Emina Hotilovac of Kentucky, Brandon Maxwell of Nashville, and Christy Neal of Nashville.

Patterson, who is also chief optimizer of Micheal Burt Enterprises, said the program sprung from a lunch discussion with Burt, who wanted to do something special to motivate people going into the new year. Patterson describes the show as a hybrid of popular reality shows "The Apprentice" and "The Amazing Race" in which Burt uses his gifts as "an incredible speaker, author and trainer" to bring out the best in those he's coaching.

The contestants will compete in three challenges: The Zebra Challenge - Trying to understand what makes them unique; The Cheetah Challenge - Determining how agile and quick thinking they can be; and The Final Challenge: Appearing before a three-person board of advisers to make their pitch.

"Coach challenges five people who have high aspirations for 2014, but are not taking that next step," Patterson said. "He's going to force them to evaluate where they are, determine what makes them unique and what's going to help them stand out, either in their businesses as entrepreneurs or as individuals."

Potential contestants submitted videos about how they wanted more from their lives in 2014 and wanted to be coached by Burt to achieve their goals. Burt and his staff looked at 20 to 25 videos and narrowed the list to five contestants, whose backgrounds range from a former teacher/coach to an office manager.

"We picked those candidates based on their stories, their backgrounds, how bad we thought they were interested in coaching and the diversity of the group," Burt said.

"The board represents the world … to get contestants in front of them and say, 'This is why you should have a relationship with me,'" Burt said of the final challenge. "These advisers are experienced zebras and cheetahs in the world critiquing these contestants. They ultimately decided who the winner was."

Burt said he and his staff will be engaging with the audience on social media now and throughout the show, on Twitter @michealburt, hashtag #ZebrasCheetahs and also on his Facebook page. He thinks the show will give viewers plenty to discuss online.

"We laughed, we cried. Every contestant said it changed their life," Burt said. "And it changed our lives. It shows us how we can truly affect people, and it doesn't take years to do it. We can do it in a very short period of time if we just get in the boat with them, and it's that intense of an interaction."