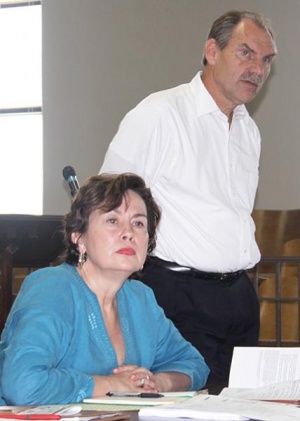 State officials have begun to sort through the list of problems associated with four or five privately administered mental health facilities located in Cannon County.

“We’re trying to sort out rumor from fact,” Pody said.

Attending were officials from the Tennessee Department of Mental Health, including Cynthia Tyler, director of the Office of Licensure. Also on hand for the meeting were Sheriff Darrell Young and Investigator Anthony Young and County Executive Mike Gannon.

“I have heard a lot of rumors,” Pody said. “Please stay with what you know heard.” he told those in attendance as they raised their hands to speak.

“I’ve known about this for eight days and progress is being made,” Pody said. “We want each of you to be safe in your own home.”

Senator Beavers said among her concerns was the fact no notification was given to area residents.

“What kind of notification is given to the surrounding residents?” Beavers asked Tyler.

However, each facility must be inspected regularly by the Department of Mental Health. In fact, one of the facilities, located on Sunshine Lane, was inspected the day of the meeting, she said.

“Ideally the group home should act as a traditional family home,” said a representative of the Tennessee Fair Housing Council, who was in attendance at the meeting.

County Executive Gannon asked if there is a limit on the number of similar facilities that could locate in Cannon County. “We only have 13,804 people. I didn’t even know that these existed” until one popped up near the church he attends.

“That’s made some of the congregation nervous. They want to lock the doors during services,” Gannon said.

“There is no limit,” Tyler answered.

Much of the discussion at the meeting concerned a facility on Sunshine Lane.

Sheriff Young said deputies had been called there “numerous times.”

“Most of what we deal with is their people wandering away,” explained Investigator Young, who said the Sheriff’s Department is not equipped to handle this type of escapee. “We’re a jail, not a mental health facility.”

“The owner hires a house manager to be in charge. They can’t be locked up or locked down,” Tyler said, “but some laws apply to these residents.”

An area resident cited one incident where a school bus was stopped by a naked resident laying in the middle of the road. Once the bus stopped, the nude resident tried to get on board. The bus was loaded with students at the time.

Others reported residents breaking into their homes and cars.

It was one of those break-ins that resulted in the meeting with Pody and Beavers.

In that case, a man was discovered living in a neighborhood barn and had taken medications specified for horses. He was LifeFlighted to a Nashville hospital following the incident.

“They need signage … they need fencing. They should be made to put at least a fence around their property,” one man said.

Inspector Young said he couldn’t understand why Adult Protective Services refuses to help in most instances at the facilities.

In once case, the Sheriff’s Department was called about an individual standing outside in a snowstorm only wearing their underwear.

In another, a woman wondered six miles away from the facility and “they didn’t even look for her.” Young said. “I speak four languages, but it turned out that she was Italian.

“I don’t understand why Adult Protective Services won’t even call us back,” the investigator said.

“If you call in the future and they don’t call back, you call me,” Pody said.

The state Representative said he and Senator Beavers would soon be meeting with officials from the Cannon County facilities and with state fire inspectors.

“It sounds like some of these people aren’t prepared to be living on their own in a facility of this type,” Beavers said.

Print
Members Opinions:
[Delete]
It is simple. The reason we have these types of facilities moving to Cannon County is because there is no zoning laws to prevent them from moving here.

Why is there no zoning laws to prevent them from moving here you ask? Because the County Executive and the County Commissioners refuse to enact them because "I don't want someone telling me where to put my minibarn at on my own property".
Well guess what! That kind of genius thinking now has people from a mental facility living in your minibarn.