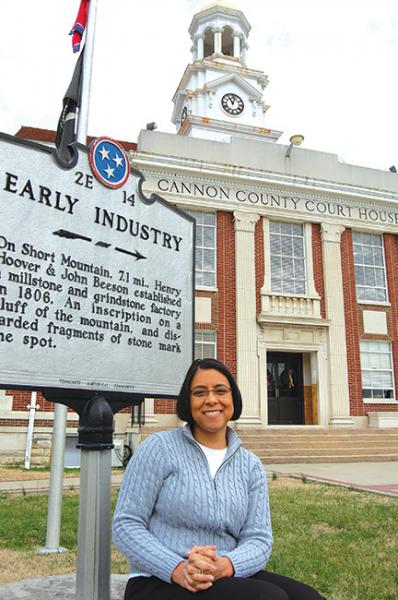 To a small circle of Capitol Hill insiders, Woodbury's Cicely Simpson is known as the "doughnut/ice cream/coffee lady."

"It's sort of in jest. It's a joke, but people really do love our brands, so they love the fact there is someone who represents Dunkin' [Donuts] and Baskin [Robbins] in Washington. They all know me as working for doughnuts, coffee and ice cream, which is not a bad thing at all," says Simpson, vice president of government affairs for Dunkin' Brands Group, Inc.

"You just can't work with better people. It's two great brands. No matter where I go when I tell people that I work for Dunkin' Donuts, they say, 'Oh, I love your' fill-in-the-blank, whether it's a donut or breakfast sandwich or cup of coffee. The same thing with ice cream. I just love the reaction I get from people. I want to get one in Woodbury," she says of her wish for a Dunkin' Donuts restaurant to set up in her hometown.

Born and raised in Woodbury, Simpson, 40, attended Woodbury Grammar School, then graduated from Cannon County High in 1992. Today, her work takes her to more than 100 Dunkin' Donuts establishments a year. To sate her hunger for a doughnut as a young person, she had to head for the city 20 miles east.

"I drink two or three cups of coffee a day, all at Dunkin', either at the restaurants or through the K-Cups at home, easy a thousand cups a year. I drink my fair share, and I have a doughnut at least once a week. My favorite is the sour cream donut. It's delicious."

Simpson's mom and dad are Woodbury native Patricia Odom Simpson, who worked as a nurse for Dr. William Bryant at Bryant Clinic from the late 1960s until she retired in 1996, and James Simpson, a native of Sparta, who served as a Marine during the Vietnam War and worked at the Carrier plant in McMinnville and for Peterbilt Motors in Madison.
Her older brother, Shawn Simpson lives with his family in Bradyville and is a small-business owner in Murfreesboro. "Everything he touches he's good at," says Cicely.

As a youth she played softball and was a cheerleader. Her love of sports carries on to this day, and she played a few years back in a congressional softball league.

"I am a huge sports fan," Simpson said. "For me it's all things University of Tennessee: football, basketball, softball. I grew up in a sports-oriented family, but UT is just a love I've grown up with over the years. I go every fall to UT football games and a couple of basketball games. I'm a big Lady Vols fan and a Titans fan, and I went to the U.S. Tennis Open last year."

An avid reader of history and politics, she enjoy hanging out with family and friends when she returns to Woodbury once or twice a month.

Simpson graduated with a political science degree from Lipscomb University in 1996 and worked for the school for two year as an admissions counselor before heading to Malibu, Calif., where she earned a law degree from Pepperdine University's School of Law.

"I had wanted to be a lawyer since I was 8. So I had had my sights set on the legal field for a long time," she recalled. "I practiced criminal law as a district attorney in Southern California, but at that time 13 years ago, D.A.s didn't get paid a lot in Southern California, so my choice was to stay there or come back to Nashville and work for a law firm."

Thus, she relocated to Music City to serve as a law clerk for the firm of Lewis, King, Kreig & Waltrip. While studying for her bar exam, she ran into a friend from her days at Lipscomb.

"This has been a running theme in my life of many, many accidents, actually blessings, I guess," she said. "He knew I used to be involved in politics as I had been a volunteer for the [Phil] Bredesen campaign."

The friend convinced Simpson to enlist in the political campaign for Lincoln Davis, a Democrat running for the U.S. House of Representatives.

"I did policy advising, I was the scheduler. We were a very small congressional campaign. There were only six of us. . . . He won by a very small margin in November 2002," she recollected.

The same night after winning the election, Davis invited Simpson to be a member of his staff in Washington, D.C.

"I said, 'What am I going to be doing?' and he said, 'I don't know but we'll figure it out.'
We got to Washington and set up his congressional office, and after Christmas 2002, he named me his legislative director. I didn't quite know what that meant, but I quickly figured it out."

Simpson also served in the same role for Tennessee Congressman Jim Cooper from 2005 to 2008, and she worked as federal affairs manager for the Tennessee Valley Authority in their District of Columbia office for a year and a half, watching issues that effected TVA and its constituents.

Her move from working for politicians to working for those who sell doughnuts, coffee and ice cream occurred after Jim Cooper became the first member of Congress to endorse Senator Barack Obama for president. She had already served in one long presidential campaign and figured that was enough.

"I decided I should probably start looking around. I was not sure I wanted to be on the Hill too much longer, and I started looking for the next opportunity. A friend of mine said, 'Hey, Dunkin' Donuts is looking to start a Washington office. Is that something you'd be interested in?'

After that first conversation, Simpson left, thinking, "I'm not entirely sure exactly what I'm signing up for. But OK, I'm up for starting a Washington office for doughnuts and ice cream."

She took the job in March 2008 and today is vice president of government affairs, a role she describes as, "Basically, I'm a lobbyist for the folks who own the restaurants. So I tell everybody what I did on Capitol Hill [as a legislative director] is what I do for Dunkin'. I watch all the issues that are going through Congress.

"I work with members of Congress, with the Obama Administration. I also worked with the Bush administration. And I work with governors, and I work with state legislators, all levels of government: federal, state, and local on behalf of our restaurateurs and on behalf of our franchisees, basically just watching the legislative issues, government legislation and regulations that may affect the restaurants and making sure our franchisees are aware of what's going on and how it effects them."

"A lot of what I do is educate and inform because members of Congress have a lot of issues on their plate, and I help them understand how it affects the small business owner back here in Tennessee."

Spending 50 to 60 percent of her time on the road, she noted, "We're in almost all 50 states now. I do travel to meet with franchisees so they can hear from me directly about what's happening both in their state and also what's happening in Washington."

While she has worked with the staff of the First Lady, she has never met Michelle Obama, but a year ago she did get in a short chat with the President.

"It was the morning after the State of the Union. He was speaking in Maryland, and I was invited to be in the audience. I attended and got a chance to shake his hand and make a couple of comments as he was working his way through the crowd," she recalled.

While meeting and greeting with the President was quite a trip, Simpson loves her small-town roots and whenever she crosses paths in the D.C. area with folks from Tennessee, she is eager to know from where they hail.

William James, who grew up in Gordonsville in Smith County but has lived for over 30 years in Lebanon, commutes occasionally to Washington, D.C., in his job for the Army Corps of Engineers, and early last summer he and his wife Vicky made Simpson's acquaintance.

"She kind of discovered us. We had been going to a little church in northern Virginia, the Arlington Church of Christ," James begins. "We pulled in one morning and were walking in, and Cicely said something about my UT license plate on the front of my car.

"She hollered 'Are you a UT fan?' That got us started talking about where we were from. I usually say Nashville and work my way down. 'Well, actually I'm from Lebanon.'

"She said, 'Well, I'm from Woodbury,' and then I said, 'I'm from Gordonsville.' She said, 'I've been there before.' We got to talking and sat down together and found out more about her. Every Sunday after that, we'd get together and talk a little bit about family. It was good to meet somebody who actually knew where Gordonsville, Tenn., was," said James.

Simpson proves to be a Tennessean all the way and enjoys her frequent trips back to Cannon County.

"I miss the slower pace of life and I miss just being at home. I've been in Washington for a number of years and always have been blessed to be affiliated with Tennessee but now I'm thankful I can get back.

"No one asks me about politics here or what's happening in Washington, so I get the best of both worlds. I get the small town of Woodbury, but I get to go back to D.C. and engage in politics and do what I love so it's quite a contrast," she said.

When Simpson does come home, besides mom and dad's house, there are two other places on her must-go-by list.

"I'm always at Joe's [Place] while I'm here and then DJ's. These are the two places I come to every single time I am here at home without fail, and I know the people here by name. At Joe's I love the fact that when I come in, I see people I haven't seen in a long time and the friendly atmosphere. I tell people in Washington that small-town places still do exist. I describe Woodbury to them and they're like, 'Wow, that's somewhere I'd like to see.'"