Christmas pops on the Square 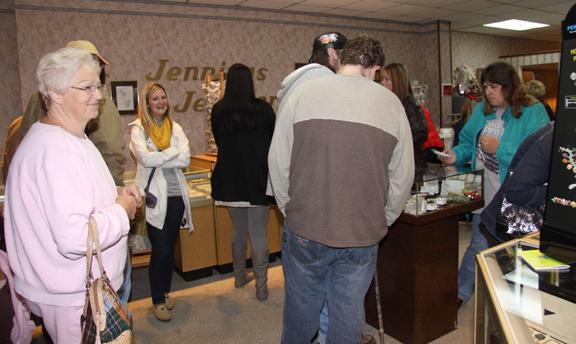 Shoppers crowd into Jennings Jewelers on the Square in Woodbury.

If there's someone on your Christmas list who's hard to buy for, antique stores can be the place to find the perfect gift. Even Santa shops at them, and Woodbury has tons of them.

If you circle the Courthouse square, you'll find them on all four sides and overflowing onto side streets. Each shop is basically an antique mall, too, featuring several vendors with a wide variety of antiques, collectibles and special handmade gifts.

One of the biggest stores, with 50 vendors, is the Old Feed Mill Antique Mall, a block west of the courthouse. The mall offers everything from player piano rolls to repurposed decorator items. These include wind chimes made from coasters and kitchen utensils, or a heart-shaped wooden plaque festooned with antique keys and called "the keys to my heart."The mall also has the longest history among the antique outlets in Woodbury. Its current operators, Michael and Debbie Vaughn, have owned the building for nine years.

Before that, Tommy and Linda Malone owned it. They actually converted it into an antique mall. Earlier, it was a feed mill and ice house owned over the years by several people. "But the original building was an ice house, built in the 1920s," says Michael Vaughn, who also sells about 20 tons of feed per week out of one section of the building.

His wife Debbie runs the Gathering Place, a small sandwich shop at the back of the building, which is open Thursday, Friday and Saturday for lunch from 10:30 a.m. to 2:30 p.m.

Their chicken salad croissant is one of their most popular sandwiches, according to Debbie. "We tried taking it off our menu for a few days, but our customers demanded it back," she says.

Just up the street on the corner is Antiques on the Square, owned by a mother-and-daughter team, Mollie Knox and Desiree Sinks. With about 35 vendors, it features lots of antiques, including everything from toy fire trucks to collectible glassware and china.

Mollie, who was born in England, says her career-Air Force husband Robert came to England and "took my heart prisoner," bringing her to Woodbury 34 years ago.

She and her daughter took over Antiques on the Square four years ago when the former owner decided to sell. "Desiree worked here first, so when the owner left, we took over," Mollie says.

The store won the Ruthies Award as favorite antique store two years in a row in 2011 and 2012. "I love antiques," says Suzi Huff, a recent customer at Antiques on the Square who had found a collectible bell to purchase. "I buy them for gifts all the time."

Another Ruthies winner, this time in 2013, Antiques and More is kitty-corner across the square. They are one of the newest stores, only open at this location for a year.

Their 40 vendors are spread over two floors and sell at least 50 percent antique merchandise. The rest of the merchandise includes collectibles and a variety of other items including fishing poles, musical instruments and beautiful furniture.

Antiques and More is owned by Trish Forst and Judy Rodriguez, whose granddaughter Maya Reed, 10, is their "best cashier ever."

One door down the street is the Treasure Chest, which opened for the first time Friday. Owner Freda Haley says she only has five vendors so far, but she's looking for more.

Her love of miniatures shows up in the doll-sized furniture she is offering in her shop. "If you want to furnish your dollhouse, this is the place to be," she says with a smile.

There's also a model train she plans to have circling her shop. When asked if it would be for sale, she said yes, for the right price.

"Let me tell you, I have two dogs at home that I love better than anything, but for the right money…" she quips.
Back across Main Street is the Bean Patch, next to two stores that burned out recently. But this store, with eight vendors, is reviving and will be doing well for the weekend with its diverse inventory including handcrafted furniture, chess sets, and antique bottles.

Some of them are even "Woodbury bottles" originally manufactured to hold Woodbury shampoo and cologne, a once-popular national brand.

The store's name comes from the owners' family name: Susan and Tom Bean.

"We used to say we had four Bean sprouts, four sons. Now they have five Bean sprouts, two grandsons and three granddaughters," Susan says. "Our chocolate Lab, we named him Pinto for pinto beans."

So of course, the Beans named their store the Bean Patch.

The front window of the Bean Patch will display Tom's handiwork. There will be two model trains, "one passenger and one freight train," says Susan. She adds that Tom also is building miniatures of the courthouse and Short Mountain as well as other local landmarks for the special Christmas display.

For those shoppers who need to economize, the Cannon Outreach and Thrift Store on South McCrary Street may be the best choice. Recent customer Betty Willis had this to say: "I shop here all the time. I love it and the prices are reasonable. Everything is so nice and clean."

The shop, which sells only donated items, is sponsored by the First United Methodist Church. All proceeds go to support the school backpack food program or to assist victims of domestic violence.

While much of the store's merchandise is clothing, it also has an assortment of jewelry, dishes and collectibles. The front section of the store features all sorts of Christmas decorations and furniture.

Right next door to the Thrift Store might just be the best place to find a gift for the handyman on your list. The S and S Auto Parts Store, owned by Fred and Carolyn Schwartz, carries a full line of tools in addition to car parts and oil.
Of course, shopping is hungry work, and while Friday and Saturday will feature all sorts of treats at almost every store around, shoppers may want to take a break for a "real" meal. Joe's Place, owned by Randy and Michelle Barrett and Kim Higgins-Fann, offers a full menu with country-style biscuits and pies by Ovie Hollis.

"I've been here since 1992," Ovie says. "I used to do it all, steam table and everything. But these days I just come in to make biscuits and pies."

And on the other side of the Square, there's the Lion's Den Pizza, tucked in-between the Treasure Chest and Briar Rose Flowers and Gifts.

And last but far from least, you could always consider a gift subscription to the Cannon Courier, also located right on the square.