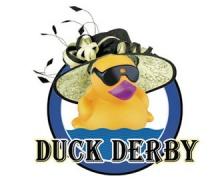 MURFREESBORO – 12,000 yellow rubber ducks cheered on by a crowd of spectators glided down Stones River Saturday during the annual Duck Derby sponsored by the Child Advocacy Center of Rutherford and Cannon Counties.

The first duck to cross the finish line was adopted by Mike Bishop of Antioch, who won the grand prize of 5,000 bucks donated by King Quacker Sudsy’s Car Wash.  Bishop purchased his duck adoptions at the Child Advocacy Center.

The last duck standing was the very last duck fished out of the water.  The prize was presented to Kimberlyn Kellogg, who adopted the duck at the Duck Derby on Race Day!

Just before the race, 4 Kings was crowned King of the Wing, presented by T.L’s Trophies, for the best chicken wing competition during the Wing-off.  It was a close race between Slick Pig, Kirkenburts, Lanes Trains and Automobiles, Buffalo Wild Wings, and 4 Kings.

A free Family Fun Fest kicked off the activities with games for kids of all ages. A flash mob gathered and danced to the tune of the “Return of the Duck.”  Kristin Demos and Kristan Roberts led the dance with the Blackman cheerleaders.

All proceeds of the event will allow the non-profit Child Advocacy Center staff to provide services for sexually and physically abused and endangered children. More than 7,500 children received services during the past 12 years in Rutherford and Cannon Counties.

Executive Director Sharon De Boer thanked all the sponsors who contributed cash donations, businesses who donated prizes, vendors at the Family Fun Festival, the numerous volunteers, and everyone who adopted a duck.

“This was the best Duck Derby and Family Fun Festival that we have had in the last five years,” De Boer said. “We want to thank our wonderful community for all of their support!”

Winners, their prize packages totaling almost $20,000, and the location where their duck was adopted are:

5. Best of the Boro:  Ashley Reid (Purchased at Top of the Block)