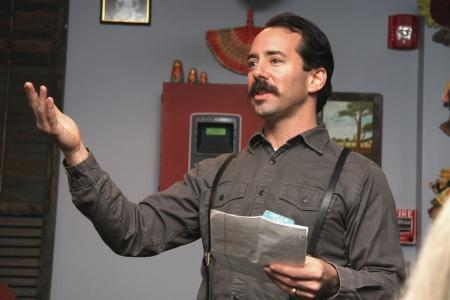 "We're making a thousand bottles a week," Distillery CEO Billy Kaufman said. "The strategy now is to grow and become a national product."

Kaufman was guest speaker at the Chamber of Commerce's annual awards banquet, an event that hit strongly on Cannon County's potential for tourism.

"We need to grow bigger two hit other markets,' he explained. "Tourism is really the biggest part of our business."

Cannon County really has a lot to offer to tourists including the distillery and the many craft artists in the community, but the friendliness and openness of Cannon residents is what really makes the difference.

"Each visitor becomes an ambassador for Cannon County," Kaufman said. Those people return home and share the story of "the people, the human interaction, that country vibe."

At Short Mountain Distillery, Kaufman said employees are geared to greeting visitors with a happy face.

"It was our goal to create a distillery that's so inviting that people will come from all over," he said.

The small distillery is attracting visitors from across the region and it's already gaining national notice.

Located on a 300 acre farm in Cannon County, the distillery makes a 105 proof authentic Tennessee Moonshine and 40 proof Apple Pie Moonshine using water from a cave spring. Both products are available in retail stores across Tennessee and are made with organic heirloom corn grown and stone-milled on site.

That organic touch recently resulted in the distillery becoming the first moonshine to win a gold medal from The Beverage Testing Institute which gave the Gold Medal for the International Review of Spirits Award to Short Mountain Shine.

"No other moonshine has ever won a gold medal before," Kaufman explained.

Meanwhile, the distillery continues to gain national and international notice. The BBC (British Broadcasting Corporation) was here recently shooting a pilot for a possible series. And the Food Network was at the distillery last week.

Among the future plans is expansion to a 10,000 square foot production facility that will be built between the distillery and the farm house. There will be space for events and plans are to add a small restaurant for table meals.

Work has already begun on the Short Mountain Trading Post, a barn that is being converted into a store that will feature distillery souvenirs as well as Cannon County crafts.

"It's all about the experience of coming to Cannon County," Kaufman said. "All of us (Chamber members) are connected. The more that we can network the better it will be."

"Cannon County made national news three times last year," Appelbaum said. And all of those news reports were good, as opposed to negative. "It was a year of very good news."

The first story was the transfer of 1,000 acres of land to the state of Tennessee as a result of a federal criminal conviction of two individuals for distribution of marijuana. The land, located on Short Mountain is managed by the Tennessee Wildlife Resources Agency and is known as the Headwaters Wildlife Management Area.  Short Mountain is a critical habitat for plant and animal species, and contains the headwaters for three Tennessee watersheds.  The property will be open to the public for small game hunting, hiking and wildlife viewing.

"This will be a long term project of both the state and federal government," Appelbaum said.

State Rep. Mark Pody interrupted Appelbaum to point out "Neal is responsible" for the transfer of land project and should be commended for his efforts.

The second major story was Short Mountain Distillery and it winning the national tasting award, he said.

Sandor Katz, a culinary author, is the third. While unknown locally, the Cannon County resident has emerged as an international expert on fermented foods like sourdough or sauerkraut.