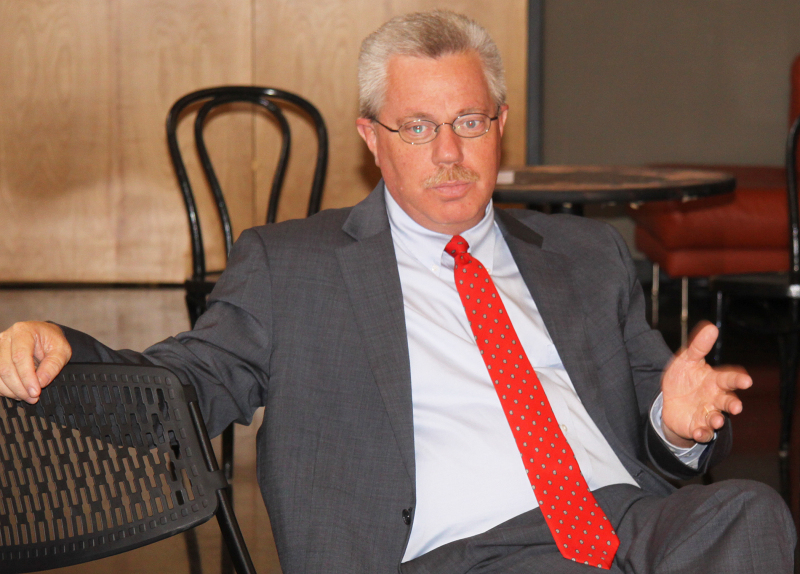 Triplett was vice president of public affairs for Bristol Motor Speedway. Prior to joining Bristol in 2005, he worked in various roles for NASCAR, ultimately serving as managing director of business operations, guiding the operation and administration of NASCAR's Sprint Cup Series, Nationwide Series and Camping World Truck Series

Triplett witnessed NASCAR's decade of explosive growth. Among the lessons he learned was "you want to accentuate what you are," which applies directly to Cannon County.

Cannon County has beauty, the arts and we need to expose that to more people, the commissioner said. Thanks to the Internet that exposure is now multifaceted between the "baby boomers, millenniums and generation X who all are looking for something new to do."

The State of Tennessee is well known for its tourism maps, which were voted the best in the nation, he said. "While I prefer a map myself, a lot of young people have never held a map in their hands," preferring to use the Internet, Triplett said. Because of that, the state is looking to "tell its story in different ways."

When it comes to tourist attractions, Tennessee is fortunate. "We don't have to create it ... we have it," Triplett said. But the face of tourism is changing as well with music and youth sports being "two huge growth areas." The growth is music-related tourism is an advantage to Cannon County and its ties to Uncle Dave Macon and old-time music.

The "trick" is to link Cannon County to nearby, but much larger counties like Rutherford, Williamson and Davidson where residents haven't heard of, much less visited, the many attractions of the Woodbury area.

"We would like to see more support for our events," said Billy Kaufman of Short Mountain Distillery. "getting the word out is expensive. We're going everything we can to bring people here. We're telling them 'To Escape to the Country.'"

The state tourism's Jack Daniels Trail isn't really helping Short Mountain Distillery with the emphasis being put on the much larger Jack Daniels Distillery in Lynchburg, he said.

"We've had better results advertising on Internet sites like Groupon and Living Social and giving away hats and t-shirts and shot glasses to attract visitors," Kaufman said.

The privately established "Tennessee Whiskey Trail" is more effective too, the distillery owner continued. It attracts visitors to smaller distilleries like Short Mountain and allows them to promote events, he said.

A promotion being planned for the original state Route 1 could help Cannon County get the message out, said Triplett. That roadway, now known better as US 70S, cuts through Cannon County. Signs marking that first roadway have already been erected in Cannon County.

But signage is a problem for attractions like Short Mountain Distillery, Kaufman said. The state Department of Transportation won't allow signs marking the route to the distillery. "I have had some luck with local landowners" in placing signage but the state has warned the signs must not be on the state right-of-way and signs on I-24 and I-40 are impossible because of the distance involved.

"We don't want to change Cannon County but instead celebrate what exists," Kaufman said. "In 15 minutes you can be a million miles away."

Print
Members Opinions:
[Delete]
A thriving, dynamic web presence is critical today for attracting interest and visitors to Cannon County. What websites do this? Cannon County has the potential but is not yet there. Much work is still required.