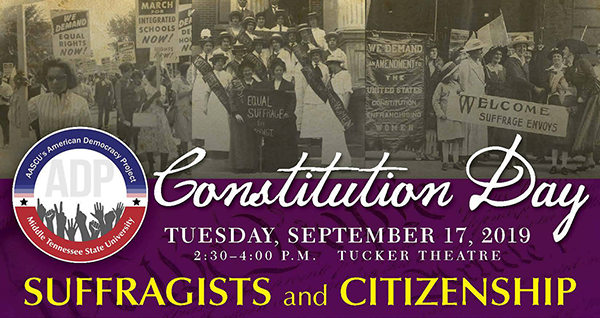 MURFREESBORO, Tenn. -- MTSU's 2019 Constitution Day celebration is focusing on those who've made history -- and those who can change it -- by exercising their right, and privilege, to vote.

The university's annual observance of Constitution Day is set Tuesday, Sept. 17, when students, faculty, staff and visitors mark the 232nd anniversary of the signing of the U.S. Constitution by reading the historic document aloud, in its entirety, and registering voters at multiple sites across MTSU throughout the day.

The celebration will culminate in a public panel discussion, "Suffragists and Citizenship," at 2:30 p.m. Sept. 17 in Tucker Theatre, located inside the Boutwell Dramatic Arts Building at 615 Champion Way.

Moderator and New York Times opinion writer Margaret Renkl will guide the panel discussion, featuring state Rep. London Lamar and historian Marjorie Spruill, in examining Tennessee's pivotal role in giving women the right to vote in the United States and how those votes have played a crucial part in American history in the last century.

Tennessee's General Assembly narrowly ratified the 19th Amendment on Aug. 18, 1920, making Tennessee the 36th of 48 states to sanction women's suffrage. The decision, which earned Tennessee the nickname of "The Perfect 36," delivered the necessary three-fourths majority to amend the U.S. Constitution.

"The centennial of the 19th Amendment not only highlights a proud piece of Tennessee history, it is a platform for broad discussion of voting and voter engagement. All Americans, all Tennesseans, must be active, engaged, participating, voting citizens. All Americans, all Tennesseans, must be suffragists in our time," said Mary A. Evins, an associate research professor in MTSU's University Honors College and coordinator for MTSU's chapter of the American Democracy Project.

Lamar, a Memphis native, became Tennessee's youngest legislator in January 2019 when she was sworn into office for her first term at age 28 to represent the 91st District. A bipartisan measure she is co-sponsoring with state Rep. Charlie Baum of Murfreesboro, an MTSU economics professor, and state Sen. Raumesh Akbari of Memphis would give university students, faculty and staff easier access to the polls by using Tennessee public institutions with 8,000-plus student enrollments for early voting sites.

Spruill, the Distinguished Professor Emerita of History from the University of South Carolina, is the preeminent scholar of the women's suffrage fight in Tennessee. Her most recent book is "Divided We Stand: The Battle Over Women's Rights and Family Values That Polarized American Politics," and she served as a consultant for a PBS documentary, "One Woman, One Vote," the HBO movie "Iron Jawed Angels" and Nashville Public Television's recent "By One Vote." She's currently creating an oral history archive of interviews from the 1977 National Women's Conference in Houston, Texas.

Renkl is a Nashville author whose recently published collection of essays, "Late Migrations: A Natural History of Love and Loss," was a Publishers Weekly magazine "Pick of the Week." She's also the founding editor of Chapter 16, a daily literary publication of Humanities Tennessee.

Limited free public parking for the Sept. 17 event will be available in the lot adjoining MTSU's Reese Smith Baseball Field on Faulkinberry Drive, which is across the street from Tucker Theatre. A campus map is available at http://bit.ly/MTSUParkingMap. Visitors who park elsewhere on campus will need temporary parking permits; more information is available at https://www.mtsu.edu/parking/permit.php.

The campuswide Constitution readings begin at 9 a.m. at the new Science Building with the College of Basic and Applied Sciences, followed by readings conducted hourly by MTSU's colleges:

10 a.m. -- the College of Media and Entertainment at the Bragg Media Building.

Noon -- the University Honors College and the College of Education at the Paul W. Martin Sr. Honors Building.

Each of the document readings will last a little more than an hour.

Voter registration tables will be set up across the MTSU campus all day to help citizens prepare for the upcoming 2020 elections, which begin March 3, "Super Tuesday," with presidential preference and state and county primaries. Tennessee's state and federal primary and county general elections are set Aug. 6, 2020, and the state and federal general election, which includes the presidential race, is set Nov. 3, 2020.

"Get registered now. Super Tuesday will be here soon after the first of the new year," Evins said. "Do not put off getting positioned to vote. Register in the county where you sleep, where you park your car at night, where you put your shoes under the bed. Research tells us, people vote regularly when they can easily get to the polls. Live here, vote here. Check your registration at Tennessee Voter Lookup. Update your registration at GoVoteTN."

MTSU's popular "True Blue Voter" initiative, a partnership with the Rutherford County Election Commission launched last year to boost voter registration and awareness in time for the 2018 mid-term elections, is continuing into the coming election cycle.

The effort, with the help of American Democracy Project members and the MTSU Student Government Association, has added hundreds of new voters to the rolls so far. More information about the "True Blue Voter" project, as well as voter registration and verification information, is available at http://mtsu.edu/truebluevoter.

New voters of all ages also can register during regular business hours this fall at the following campus locations:

For more information about Constitution Day and other American Democracy Project events at MTSU, email amerdem@mtsu.edu or visit http://www.mtsu.edu/amerdem.