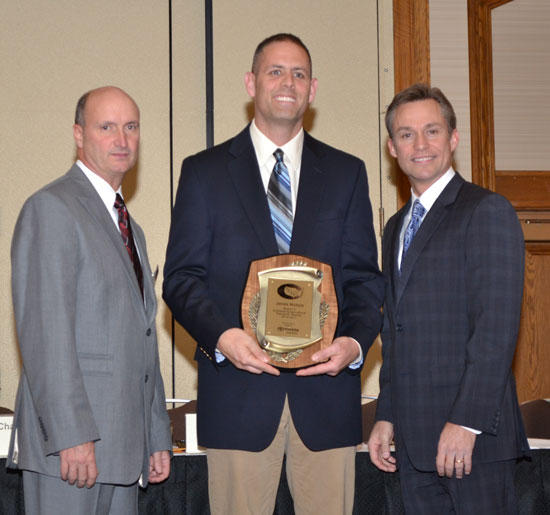 Greg Curlin, NAAE president, Courtney Nichols and Will Nicklas, Corporate Manager of Procurement and Administrative Services for Toyota, the award sponsor.
ST. LOUIS – James Courtney Nichols of Woodbury is one of only six individuals nationwide who received the National Association of Agricultural Educators (NAAE) Outstanding Teacher Award on Nov. 16, 2011, at the NAAE annual convention in St. Louis.

Nichols has been the agriculture teacher at Cannon County High School (CCHS) for six years.  During those six years, the school district felt it would be a good idea to create a new curriculum based on horticulture, to open students’ and the community’s mind about all the diverse opportunities that agriculture has to offer.

Previously, the only courses that CCHS offered were Agriculture I, II, III, IV and Agricultural Mechanics.

In order to create a new curriculum there also had to be a place to teach these new concepts, so the district funded the building of a 1,800 square foot greenhouse.

During the first year of the horticulture curriculum’s launch, the CCHS agriculture program saw an increase in student participation from 140 students to 289, and even better, the students produced a successful crop.  This high level of success in such a short period of time encouraged members of the school district to take a closer look at the infinite potential that this program truly has.

CCHS is now building 1,200 square foot hydroponic greenhouse, and a small tract of land has been allocated for the development of fruit trees and nursery stock.

Each of the six regional Outstanding Teacher Award winners received a plaque, expense paid trip to attend the NAAE convention in St Louis and a two-year lease on a 2011 Toyota Tundra. Toyota sponsors the Outstanding Agricultural Education Teacher Award as a special project of the National FFA Foundation.