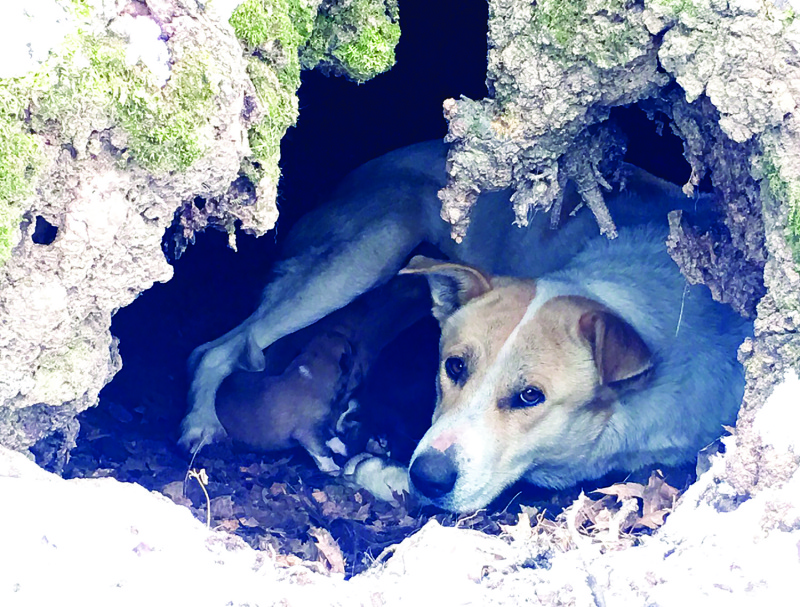 It seemed an innocuous meeting with a fledgling nonprofit seeking support and a foothold in Cannon County. Miranda, Missy, Sue, Kathy and I had met for about 15 minutes, during which I learned about the terrible plight of stray dogs and cats in our area. Then Miranda's cell phone rang and we had a dog to rescue! It was "Goldie Jane!"

Miranda Caffey-Vogeler is the president of Cannon County Community for Animals (CCCA) and she takes most of the calls for stray dogs needing rescuing. She and her husband Neil operate Short Mountain Dog Rescue and over the last eight months 98 dogs have been rescued, rehabilitated and re-homed. Miranda has been rescuing abandoned dogs and cats for eight years, yet Goldie Jane had proven elusive more than a few times.

By many accounts Goldie Jane has been wandering downtown Woodbury for about four years and has had four litters. Her right rear leg was severely injured and she limps badly. Many local residents have fed her, one, Mindy Gordon remembers "Goldie Jane" as a puppy and actually gave her antibiotics for her injured leg, possibility the result of being caught in a steel trap.

Kim Smithson of the UT Extension Service made the call to MIranda and on arrival we walked around the Cannon County REACH building. "Goldie Jane" came out from under the hollowed out tree and once again aware of the rescue intentions left the scene and her eight puppies born the night before. Missy crawled under the tree and began to gather the puppies which we wrapped up in her husband Dave's jacket.

Missy Kehler is the vice president of CCCA. She and Dave moved to Cannon County and have been rescuing animals for over 20 years. They transport the dogs to northern states where they have built an impressive network of people that provide homes for these animals.

After "Goldie Jane" fled, we set up a sturdy metal cage-like trap near the tree, but the weight of the puppies kept causing the trap door to shut. Undaunted plan B was hatched and we split up the puppies. Two were cleverly wrapped in towels so when Goldie Jane returned they were difficult for her to " unwrap" and six were put in a box and carried next door where we waited for mom's return.

CCCA is a federal 501 c 3 organization with the ultimate goal of establishing a Cannon County Animal shelter. Research indicates that our county is one of the very few in Tennessee without a shelter. In order to build the much needed shelter it will take a coalition of our citizenry melded with the help of both city and county governments. In April, DeKalb county will break ground on their new shelter. In an interview, Marsha Darrah who spearheaded the new shelter related that groundswell support from the community
was the first step. Eventually as the movement gained momentum a vacant building was turned into a thrift store staffed by volunteers with all proceeds going to the new center. Additionally, local historian Tommy Webb gave lectures that raised thousands.

Certainly donations are the cornerstone of community projects and the CCCA is very much in need. Many have already contributed and donations are tax deductible. Cash donations can be made at First bank at 101 W. Main and checks can be mailed to P.O. Box 21, Woodbury, TN 37190. Sue Stancil is the treasurer of CCCA and has been a tremendous advocate for the organization.

After some 15 minutes we spotted Goldie Jane returning to her puppies. She was nervous, wary and after four years of living on her own as sly as a fox. Fortunately, and after several anxious moments, her maternal instincts trumped her skepticism and we had captured her. Immediately, we covered the cage with a blanket to reduce her stress and transported her to Cannon County Animal Clinic, reunited her with her puppies and put her in the care of Dr. Gayle Tate, long a talented and dedicated advocate for animal welfare.

As of this writing, Goldie Jane and the pups are safe in an area home. When the puppies are weaned Goldie Jane will be spayed and hopefully her badly injured rear leg can be repaired. CCCA will find good homes for her and her puppies, yet there are many other dogs and cats needing help. CCCA does not
work with horses and is not affiliated with any other organization. They are a Cannon County non-profit and need your help.
,