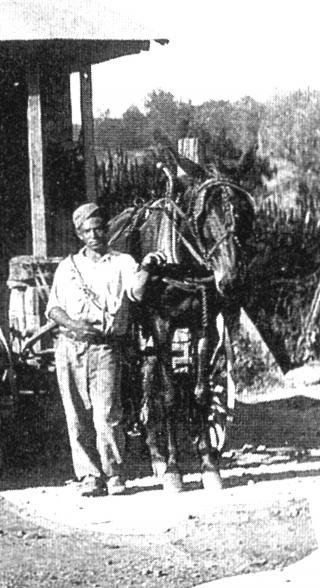 If you get a 'chill' when speaking the names of Frederic Tudor, Bo Batey and Jesse Womack, it could be deemed natural, for all three names go back to America's second 'ice age.'

America's commercial ice age is not to be confused with North America's continental catastrophic ice age that froze out the dinosaurs millions of years ago.

Tudor, Batey and Womack helped bring America into the more comfortable-living eras of the 19th and 20th centuries as ice peddling merchants.

The late Bo Batey was an ice peddler whose territory blanketed Woodbury in the 1930s-era as an agent for the Crystal Ice & Coal Co.

The ice company was owned for a period of time by the late Dr. J.F. Adams, and later, by B.F. Downing.

Bo Batey and his mule named Dick were the most visible agents of the ice company located on Water Street when moved from Readyville to the county seat town of Woodbury.

"You could set your watch, you could count on Bo Batey and his mule, Dick, when they'd mosey along, real slow around Courthouse Square, peddling big blocks of ice to merchants and individual homes," accounted 94-year-old Bill Smith, legendary Cannon County businessman.

"Bo would load up his ice wagon each day at the Ice Plant just off Courthouse Square," the retired banker deposited back in time. "Town folks would address the two, Bo and Dick, always as 'here comes Bo and Dick' as they peddled and distributed their blocks of ice."

Blocks of ice ranged in size from 25-pounds up to 300-pounds.

There was a system maintained by the ice peddling man and his mule. Although Bo and mule Dick's route was focused within Woodbury city limits, the ice company's territory in the 1930s blanketed Cannon County's rural routes too, including Short Mountain, Gassaway, Auburntown, Burt and Bradyville

"Some of Bo Batey's customers were Woodbury's most influential and prominent people," Smith recalled. "The whole town knew they could trust Bo and Dick to be regular and on time with their deliveries."

The animal named Dick was considered one of Woodbury's smartest mules of his time.

"Bo and Dick hauled blocks of ice, most of the time, weighing 25-, to 50- and 100-pounds throughout the community," Smith added. "And the mule somehow knew to stop on his own at each individual home or business, which was before electricity and refrigerators.

"Bo supplied each ice customer with a placard, that would hang somewhere visible from the street to the wagon," noted Smith. "The placard would indicate to the ice man whether to leave 25-pound blocks or 100-pound blocks of ice … being able to see the placard from the wagon, saved ol' Bo from making more than one trip up and down off his peddling wagon.

"And Bo had to be mighty strong, to lift those heavy blocks of ice, with his big set of ice tongs," Smith accounted.

"As a teenager, my morning duty at Dad's (the late Howard Penuel) auto repair shop, was to drive our old red truck to the ice plant, and buy a 50-pound block of ice to put in our improvised drinking fountain," recalled Lascassas resident Hooper Penuel.

"We'd put the ice inside the drinking fountain, to have a cold supply of drinking water at the shop, which was a big treat in that pre-air conditioning-era (early to mid-1950s)," added Penuel. "I recall paying 50 cents each morning to Jesse "Red" Womack, who turned out to be Murfreesboro's last active ice man. I believe we paid about a penny a pound for our ice from the Mr. Jesse."