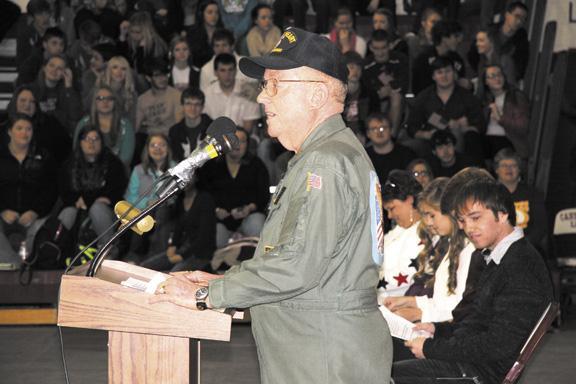 Veterans Day? No, it was a Veterans weekend in Woodbury as students and elected officials gathered to honor those who fought in America's wars.

The weekend of events kicked off on Friday (Nov. 8) with an all-day series of events at Cannon County High School, organized by Col. Jim Stone.

Stoetzel served in the Navy from 1968 to 1972. Later he was a trooper with the Tennessee Highway Patrol before being elected Sheriff of Cannon County. He subsequently served as chairman of the Cannon County Commission.
Highlights of the event at CCHS included students from Woodland Elementary School using American Sign Language to "sign" the words to patriotic music provided by the CCHS Band and Chorus.

The CCHS Band performed the official songs of the U.S. Army, Air Force, Navy and Marines as veterans from each group walked out onto the gymnasium floor and lined up behind a flag denoting their military group.

The sole Marine representative, Bobby Ferrell, received a surprise when the CCHS band performed a rendition of "Happy Birthday" in his honor. Yes, it was his birthday.

Ferrell and his wife, Amy, were also grand marshals for Saturday's (Nov. 9) Veteran's Day Parade.
Ferrell, a charter member of American Legion Post 279, won recognition as Tennessee's Legionnaire of the Year in 2012 and received the same honor this year.

Special recognition was also give by Stone to Louis Hillis, a veteran of the Korean War. Hillis was captured by the North Koreans and was a prisoner of war. Only nine out of the 108 men in Louis' K Company survived their imprisonment. Louis lost 63 pounds from July 27 through the end of September as a POW.

Stone, who is a Vietnam veteran, raised the issue of still missing POWs/MIAs.