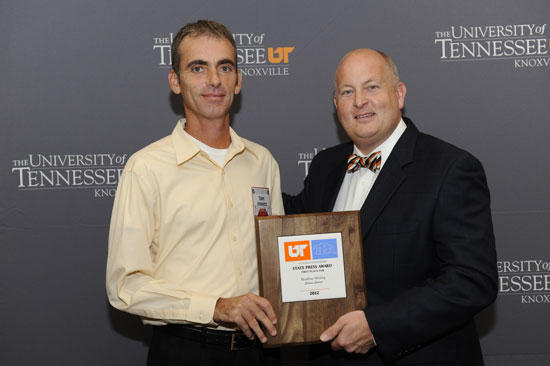 The Cannon Courier’s two first-place awards were the first such achievements by the TPA in the newspaper’s history. The newspaper earned first-place standards for best headline writing and best feature photograph. It also placed second for best news photography and third for sports writing. Tennessee newspapers were judged by Texas press members this year.

“We are extremely pleased with our showing in this year’s Tennessee Press Association awards,” Cannon Courier Publisher William R. (Ron) Fryar said. “Our judges are the people who subscribe and buy our newspaper each week but it is nice to be highly regarded by your peers.

Courier Co-Editor Kevin Halpern’s headline, “Fire Smokes BBQ Place,” was included in the headline entries. The judges said The Cannon Courier was the “clear winner, no close second,” in this category.

Courier Co-Editor Tony Stinnett’s photo of the reaction of members on the girls basketball team as they looked at a photo of themselves on another camera earned first-place for best feature photograph. The judges wrote, “Great photo, good job looking for a shot that isn’t the normal perspective.”

Halpern’s photo from the fire that engulfed Fine Swine BBQ earned second place for best news photograph. The judges wrote, “Obviously, the photographer hustled and got to the scene before the fire fighters. Some would have run just the flames photo, but including the firefighters was great!”

Newspapers are divided into five divisions based on circulation. The Cannon Courier competes in Division I against all weekly newspapers in Tennessee.

Print
Members Opinions:
MMW
[Delete]
A Tip of the Hat to the Courier and its staff.