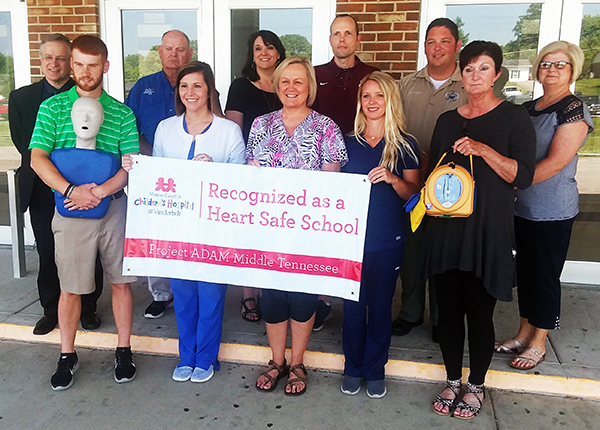 Monroe Carell Jr. Children's Hospital at Vanderbilt has committed to creating an affiliate program for the Middle Tennessee area. This new program is in alignment with the overarching vision of Children's Hospital to serve as a community that is responsive and passionate about improving children's health in Davidson and surrounding counties.

Leslie Pelham, a nurse with Cannon County Schools, said the system will be able to purchase AEDs for all seven county schools through a grant from Ascension - Saint Thomas Health.

Project ADAM designates schools as Heart Safe once they have taken all necessary steps to safeguard students' health.

• Ensuring AEDs are available and accessible

Project ADAM began in 1999 after the death of Adam Lemel, a 17-year-old Whitefish Bay, Wisconsin high school student who collapsed and died while playing basketball. Adam suffered a Sudden Cardiac Arrest (SCA), in which ventricular fibrillation occurred. This is a condition in which the ventricles cannot pump blood into the body. Defibrillation, or an AED, could have saved his life.

Adam's parents, Patty Lemel-Clanton and Joe Lemel, collaborated with Children's Hospital of Wisconsin's Herma Heart Center to create this program in Adam's memory. The program has expanded to 12 states. Over 100 lives have been saved through Project ADAM affiliate programs in which an appropriate and timely response was enacted following a sudden cardiac arrest.

Learn how Project ADAM is part of hospitals across the nation by visiting the national website, www.projectadam.com.