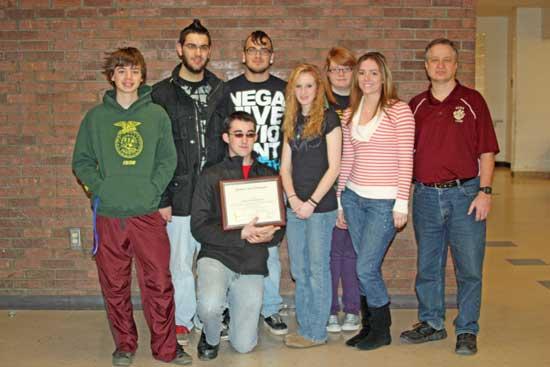 The US Government Teacher at Cannon County High School, Mr. William F. Curtis, attended two in-service meetings with court officials in preparation for the Supreme Court Case. Students were provided with study material and classroom instruction in advance by assigned Volunteer Attorneys. The Volunteer Attorneys assigned to CCHS were Public Defender Mr. Gerald Melton and Circuit Court Judge Honorable Mr. Mark Rogers. These attorneys aided the students so that they would understand the issues in the case that they would hear and how that case reached the Tennessee Supreme Court.

The CCHS US Government students arrived at the Historic Rutherford County Courthouse at 9:30 AM. They heard the second case of the day, STATE OF TENNESSEE v. JAMES LEWTER. This case was concerning evidence – ashirt found at the scene and linked to the Defendant by DNA (skin cell) evidence – and was this evidence sufficient to prove beyond a reasonable doubt that the Defendant was guilty of burglary and theft.

Students observed the Tennessee Supreme Court Members – Chief Justice Janice M. Holder, Justice Cornelia A. Clark, Justice Gary R. Wade, Justice William C. Koch, and Justice Sharon G. Lee, oral arguments and interaction with the Prosecution and Defense attorneys. They also observed court procedures, protocol, and administrative processes during the court case.
Following oral arguments, the students met for a “debriefing” with the attorneys who argued the case. These attorneys were Cameron L. Hyder representing the STATE of TENNESSEE and S. Craig Moore representing the DEFENDENT - JAMES LEWTER. CCHS US Government students asked numerous questions regarding the case to these attorneys, and many of the students learned various information about the case.

After the debrief students walked to the gymnasium of the First Baptist Church for lunch which was provided by the Rutherford & Cannon County Bar Association. Just after lunch was concluded presentations of commemorative plaques were made to each school.

Print
Members Opinions:
Straitupmarilyn
[Delete]
Congrats, I'm so proud of everyone. Mr. Curtis my hat off to you. They truly are a future leaders.