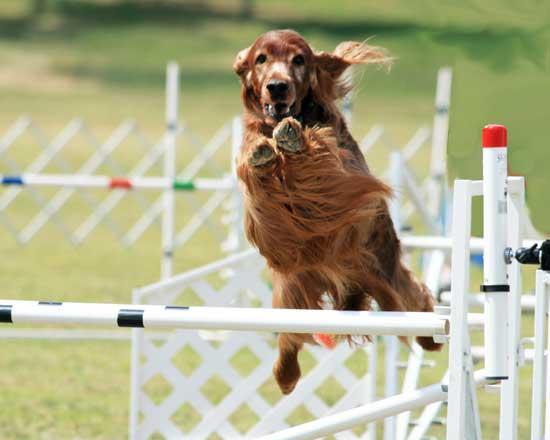 Charmin jumping obstacles at the 2008 Irish Setter Club Nationals.
Canine athletes and the handlers from Middle Tennessee will converge on Murfreesboro for an American Kennel Club agility trial this weekend. Agility competition is the fastest growing sport in AKC and is an exciting spectator sport as the dogs challenge an obstacle course under the direction of their handler.

Cathy Gibbs of Woodbury and her Irish Setters Charmin and Mia will be among the competitors. They are looking for qualifying points to earn another invitation to the AKC Invitation Agility Trial. The competition will be held this year December 2011 in Orlando Florida.

The Top Five dogs in each breed are invited first - if any of them can't attend, then more invitations are sent out in order of ranking. The AKC Agility Invitational ranks dogs based on the Top MACH Formula – MACH stands for Master Agility Champion. Points are earned for speed and placement. A dog gets one point for each second under the standard course time.

Cathy and her Irish Setters have been invitees to the AKC Agility Invitational (Eukanuba) Dog Show for the past five years. Until this year, the show has been held in Long Beach California. “It would be a shame not to qualify this year when it is going to be so much closer,” said Gibbs. Charmin, whose pedigree name with titles is MACH6 Rusticwood Swing Softly, CD RA  AXP AJP MXF is very accomplished.  As a MACH6, Charmin has earned the highest MACH ever accomplished by an Irish Setter. Adding to her uniqueness, Charmin is an AKC Breeder Owner Champion born and raised in Woodbury.

"We are very competitive but it's not always about winning, it's about going out and having a lot of fun with your dog and just enjoying the day with them," said Gibbs.

The agility trial is sponsored by the German Shorthaired Pointer Club of Middle Tennessee and will be held at Middle Tennessee University Livestock Pavilion, 1720 Greenland, Murfreesboro. The event begins Thursday, March 3rd and runs through Sunday March 6th. The starting time is around  8:00 am and goes until all the dogs have competed which is approximately 4:00 pm. There is no admission charge.