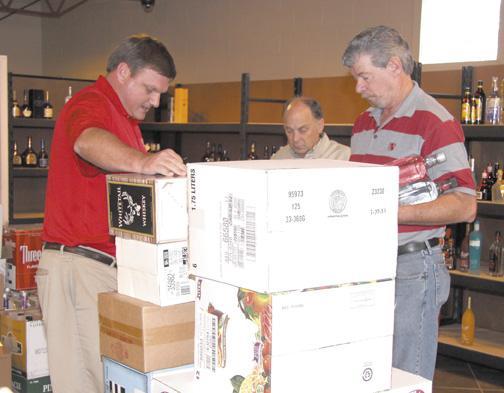 "O'Grady's" may not sound like the name of a typical Woodbury business until you find out which Grady is being mentioned.

And that would be Grady George, the 91-year-old businessman who has been responsible for a number of successful ventures ranging from restaurants, to a mobile skating rink to George's 5 and 10 cent store in Woodbury over the years.

Mrs. Reigle was the person behind Woodbury's passage of legalized liquor a year ago,  but her elderly father inspired the entire process.

"I was headed out when my 90-year-old father pulled up in his car. He still drives and mows his lawn. Daddy came up to the front porch and said sit right down here," she recalled.

Being an obedient daughter, she compiled.

"He said, 'I know what you need to do … start a liquor store,'" Mrs. Reigle laughed.

His visit was shortly after the voters of Cannon County passed a plan authorizing construction of a distillery at Short Mountain.

"He was so insistent that I finally got to checking" into the process of legalizing the sale of alcoholic beverages in Woodbury.

After finding out what the law called for, Mrs. Reigle began determining if there was any support. That led to a more formal process of collecting names on a petition.

"We had to do that twice. Our first petition didn't fit the requirements of the law so we did it again. We had a few people who didn't want to sign, but only three persons were totally against it," she said.

"I knew it was going to pass," Mrs. Reigle said.

And it did to the surprise of many citizens but not the George family.

"Just like my Daddy, I've got to be working," she said.

And while the concept may seem strange to some people, the sale of legalized liquor is a boon to Cannon County.
"Anything that's coming in to make our community better is great," she said.

A recent example of that comes in the form of two travelers from Chicago that Mrs. Reigle and her husband met, by accident, at the airport in Nashville.

"They were planning on visiting just two spots in Middle Tennessee. They were going to Short Mountain Distillery in Woodbury and Jack Daniels Distillery in Lynchburg. That should tell you something," she said.

The tax on liquor sales is another benefit, Mrs. Reigle pointed out. For every dollar worth of alcohol sold, the city of Woodbury will collect 8 cents in revenue.

And that is Mrs. Reigle's plan.

"I can't wait to show the store to Dad. I would love to bring his recliner in here and just let him sit and talk to people, but that's not possible," she smiled.

But visitors can count on him visiting from time to time.

"There is good in everybody. I always try to look for the good," she said.