Keith Ready | For the Courier 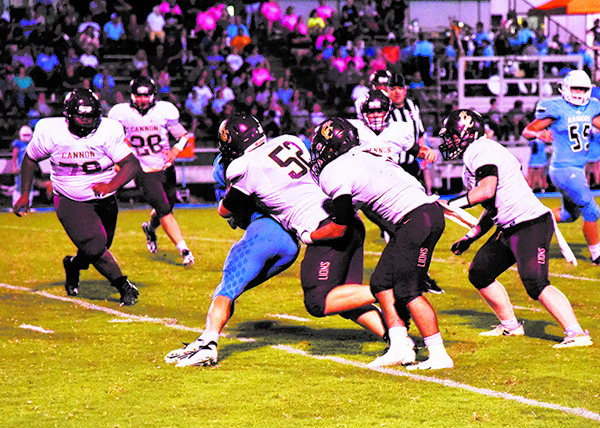 The Lion defense led by Remington James (52) recovered four fumbles and a pass interception for a touchdown by Tyler Bundy in the 20-19 loss to Moore County. (Ronny Burks photo)

Even though it is inadvertent, each week of the football schedule the Cannon County Lions has been a stepping up process.

The first two weeks of the rebuilding process, the Lions jumped out to a 2-0 start by playing 1-A opponents who were similar and in some instances smaller in size and depth.

The wins built confidence of a team that hadn't won a game all last season and were on a 16-game losing skid over two seasons. The wins also were the base of the idea that reinforced that the culture of the football program has changed

The start of the season helped propel Cannon into Week 3 where they met a much bigger team who emulate the culture that the Lions program will eventually experience with all the hard work and the foundation they are now building. That team was Sequatchie County and for three quarters the Lions did what they said they were wanting to do with every opponent and that was compete, but the Lions lost on the road.

The next step on this schedule was Moore County. The Raiders presented an opportunity to see how Cannon would respond coming off of a loss. Moore County was well prepared to welcome the Lions last Friday night, holding them to three yards rushing in the first half and while missed extra points off of scores and a fumble in the endzone recovered for a touchdown by the Raiders ended up the Achilles' heel, the Lions still competed against a 1-A team.

The non-region contests are like quizzes, prepare for the five tests that Cannon will have during the season. Those five tests are the region opponents of 4-3A football. While Moore County was the best 1-A team the Lions have faced so far, they are now in the toughest part of their schedule. Their next game is another test. A test in Baxter for a region contest against Upperman. Upperman has surprised some people as well. They are 4-0 after opening the season with a dominating victory over a usual Upper Cumberland power in Cookeville. The Bees went on the road the next week and shut out Dekalb County, beat Smith County by 14 and followed it up by shutting out Livingston in Livingston 21-0 last Friday night.

For the first time this season, the Lions will see a team who is balanced offensively. Blake Metzgar is the big back and has scored most of the touchdowns for Upperman so far this season. However their quarterback Donoven McCallister loves to put the ball in the air and has thrown for nearly 500 yards so far. Cannon will need to step up and make tackles to contain the run. The secondary for the Lions has been the best it's been in years reacting to the ball and have a few interceptions to show for it. They will also need to be sharp as more than likely they will be put to the test more against Upperman than any team they've faced all season.

The biggest concern Cannon will have is the Upperman defense. In four games, the Bees have only allowed 19 points and they are coming off a complete shutdown of a Livingston high powered offense that did nothing but build the confidence of this undefeated team.

For Cannon to put themselves in a position to compete, it is important that Cannon plays mistake free football. The Lions can control the clock if they are successful with the ground game and that means the offensive line has to do a better job at opening holes for Tyler Bundy and Cort Litchford to run through. Don't be surprised if you see more Lions get touches on the football as well. This may be a game if the Lions get behind early they may opt to be more balanced themselves with the passing game.

Cannon might want to switch some things around offensively if they can as teams are now able to counter what they have been doing in their first two wins.

The balanced attack of Upperman coupled with the fact that there they have decent depth and everybody is healthy puts Upperman at an advantage and yes for the first time in four games the Bees are playing in front of their home crowd and that doesn't help matter either.

Cannon's philosphy has been to be competitive in all games they participate in. They'll be working hard this week to come up with and execute a game plan in hopes to stun the Bees and come back to Woodbury with the biggest upset of the season so far.