Burning up the road on chicken fat 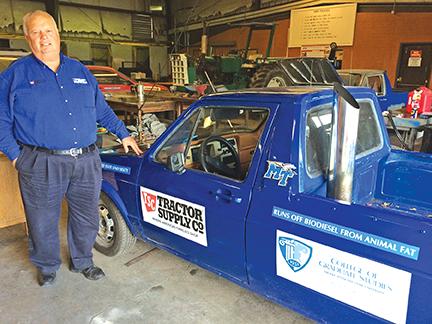 MTSU professor Cliff Ricketts stands next to the 1981 Volkswagen Rabbit pickup truck that he plans to drive from Key West, Fla., to Seattle, Wash., on Nov. 6, using biodiesel.

When we last heard from Cliff Ricketts, he was dipping his toes in the Pacific Ocean.

That was March 2013 when the Middle Tennessee State University agriculture teacher and alternative fuels expert completed a five-day, 2,600-mile drive from Tybee Island, Ga., to Long Beach, Calif., in a Toyota Prius powered by hydrogen made from sun and water, thus using zero gallons of gasoline.

He departs Thursday on his third continental jaunt, a 3,547-mile trek in a five-speed, 1981 Volkswagen Rabbit pickup truck in which he plans to use about 78 gallons of waste animal fat and some waste vegetable oil.

"I guess I'm overdoing it, going from Key West, Fla., to Seattle, Wash., doing it on biodiesel from animal fat," said Ricketts, a Mt. Juliet native, who has been a member of the MTSU faculty for 38 years.

"I thought for years that biodiesel was animal fat or used cooking oil or cooking oil mixed with diesel but it isn't. When you send it through a process, you can come out with a fuel that you can burn pure."

While the biodiesel test drive will go one direction, Ricketts and his crew will cover 7,489 miles in the round trip that begins in Murfreesboro. He estimates his "chicken fat" gas will get him from 40 to 45 miles per gallon.

"I drive at 70 miles per hour, and we go from 10 to 14 hours a day on road, so we'll be kicking butt," he says.
The alt-energy road warrior has proven his point in previous endurance runs fueled by ethanol, hydrogen and electricity.
"My thrust, my goal, my passion is to keep the U.S. off of foreign oil. I heard Arnold Schwarzenegger say that when we buy oil from the Mideast we're paying money to people who are wanting to kill us, like ISIS.

"I refer to myself as the Davy Crockett of alternative fuel. I'm the trailblazer. If I can show it can be done, then if fuel prices go back up, then we can use the same processes that we did coast to coast, so we do have an alternative."

Accompanying Ricketts on the road will be several students in his fall alternative fuels class including Renee Maynard and Lindsey Smith of Dandridge, Tenn., and Katie Fletcher of Unionville, Tenn., and Glencliff High School agriscience teacher Lucy Prestwood.

"Terry can fix anything anytime any place. He's been on every trip with me, but he's waiting to see if it's gonna rain. He needs to get his crops out of the fields," said Ricketts.

Ricketts, who will handle most of the driving in the five-speed, manual transmission Rabbit, will carry his fuel in five-gallon containers in back of the truck. His students will produce a portion of the biodiesel fuel from used cooking oil, but the bulk of their fuel supply will be furnished by Delek Industries in Brentwood, Tenn., a subsidiary of Delek U.S.

"What I am running off of is chicken fat. When Tyson Foods slaughters chickens, the byproduct or waste product is called renderings. It is mainly fat but it's also the legs, the claws and probably the guts. They cook it and turn it into an animal oil or fat," he said.

Through a process called transesterification, the fats are converted so that the glycerin in the oil is removed and the fatty acids are combined with alcohol to make a combustible fuel.

Aside from grinding it out across the U.S.A., Ricketts loves giving his young protégés the opportunity to see the varied aspects of the agriculture industry along the way.

"There is so much to learn by traveling. Students see the feed lots, the packing plants, corn fields. They see how people farm in the different parts of the world just by taking the scenic view. Then when you stop, you see a lot of agritourism sites. You learn so much by just getting out," he said.

"When we go to Key West we're gonna visit Ernest Hemingway's home, and we'll go through the Badlands of South Dakota on through the Little Bighorn Battlefield. When we come back, we'll go through Vegas, over Hoover Dam and get close to the Grand Canyon. Beside the alternative fuel goals, we just get to see so much of our great country."

Tractor Supply Company has provided the alternative-energy pioneer with approximately $250,000 for the past 23 years and donated $12,500 this year. MTSU's Office of Research and Sponsored Programs has contributed about $230,000 over the same time span.