Burnett To Fill WPD Vacancy From Within Department 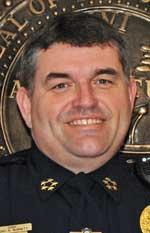 CHIEF BURNETT
Darrell Young's election as the next sheriff of Cannon County will leave a void near the top of the Woodbury Police Department.

Young is the department's assistant chief, and he will continue to hold that position until the end of this month. Young will be sworn in as sheriff in time to take office on Sept. 1.

Woodbury Police Chief Tony Burnett said he will take some time in giving consideration to the best way to move forward with the staffing of the department.

"The Assistant Chief is a title and limited to the authority given it by the Chief of Police," Burnett said. "There are some ways that I plan to structure the department in order to run the department in an efficient manner."

Because the WPD and the Cannon County Sheriff's Department frequently work together on calls and cases, Burnett says he did not become involved in the recent sheriff's race.

"I have not at any time assumed that Assistant Chief Young would win or lose," Burnett said. "I did my best to stay away from the election in order to work closely with whomever became elected. That means that I am just now getting started with this process (of making future staffing determinations).

"What is important is that there is someone in the Chief’s absence to handle the everyday running of the police department and we have those people," Burnett said.

Burnett said he will not be in any rush to place that responsibility on anyone without first consulting with them and making sure that he and the person he chooses to be assistant chief can work as a team and have the same ideas and priorities.

"The Woodbury Police Dept. has qualified people to handle the responsibility of what the Assistant Chief has taken care of," he said. "I would not consider bringing an outside person to handle anything that I have staff to fill."

The Woodbury Police Dept. currently has eight officers, and is budgeted for eight. Asst. Chief Young is still employed. His position will not be filled until his vacation time is up which at this time will be the end of August, Burnett said.

Fesmire recently filled a vacant position at the WPD. He had been working being paid with grant funds on a part time basis since April 1, 2010. Fesmire worked for the Cannon County Sheriff Dept. from July 2006 until he resigned in September 2009. He has a Bachelors degree from MTSU in Criminal Justice.