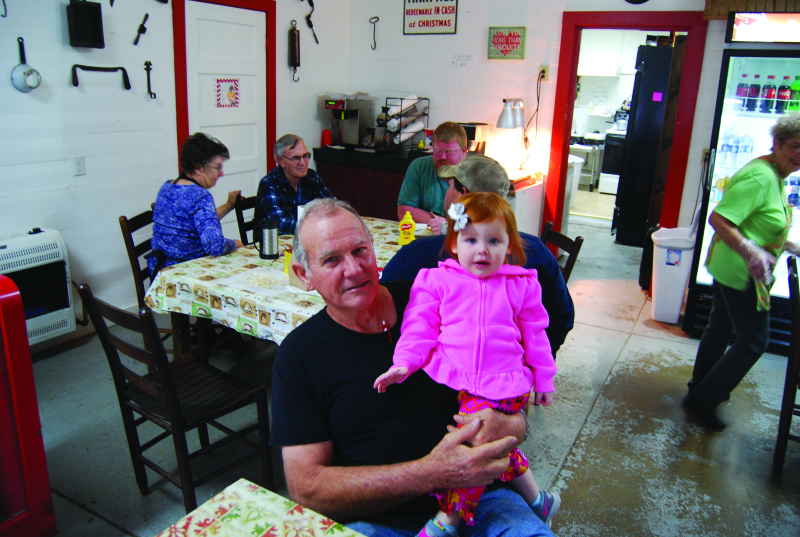 KEN BECK
The Cannon Courier
If you want the breakfast plate at Jimbo's in Auburntown, it may set you back $3.50, but the live and local news reports are free, broadcast around the table or from the bench out front.
"We got the world news right here, and the world news consists of Auburntown," says old-timer Perry Robinson from the "liars' bench" with a friendly grin.
Jimbo's café sits in an old garage that was built from Crab Orchard stone in 1939. A faded red Texaco Fire Chief gas tank stands in front of the eatery that Jimmy Mingle opened about eight months back.
"Several people talked me into it," says Mingle, 68, who moved here from Woodbury in 1957 at 10 years of age. "They wanted a place kinda to hang around."
Open 6-9 a.m. Monday-Saturday, Jimbo's serves a variety of breakfast plates, ranging in price from $3 to $3.60. It's worth the price of admission just to visit with the hometown folks and enjoy the old photos, signs and country décor tacked to the walls. They help tell the tale of a rural community, like many others across the U.S., where businesses have faded but friendships and kinships remain forged in steel.

"I had a lot of these things," says the former tool-and-die maker, retired from a career at Nissan, of the objects on display. "My wife was an antiquer. People brought a lot of this in. I hang it up.
Among the things hanging up in the dining room are old farm tools, license plates, a well bucket, washboard and pulley, and you will also notice the Ten Commandments posted on the right wall.
One of coolest items on display is a rusted door from a truck owned by the Kennedy Brothers, who operated a hardware store, a pharmacy and general merchandise business in town the first half of the 20th century. A photo placed in the center of the door shows Ervin Davenport and T.E. Jones, Mingle's father-in-law, leaning against the very truck in 1942.
"My wife run across the door at a sale," said Mingle about Elaine, his wife of 35 years, who died a year ago. The couple shared three children, Brent, Holly and Brooke, and eight grandchildren.
His strong right arm here at Jimbo's is his cook, "Miss" Hallean Tate, who was born in the Hurricane Creek community.
"We have eggs, sausage, bacon, tenderloins (what I specialize in), gravy and biscuit, toast and jelly," said Tate. "I describe it as a simple country breakfast.
"I've been cooking for the public for some time, 10 years at Dutton's, four years here for different ones, and now with Jimmy. And I love it. I love the early morning, getting up and having something to go to. It gives an 83-year-old woman something to do.
"If I don't show up, he may just have coffee," Tate joked. "We have a lot of fun here, a lot of kidding going on. We try to make everybody comfortable."
(If you drop by the cafe, be sure to ask the cook about the rattlesnake that bit her a few years ago and how she handled the situation.)
Mingle arrives here most mornings a quarter after 5. He says, "I just like the people and having a place for us to hang out. The folks who come in usually run about two crews, an early one and a later one."
He shares a bit of history about the building, which was built by Palmer Davenport in 1939. It was a garage, which was run for many years by Bunt Cooper from the 1960s into the 1970s, when it closed.
"Ross 'Juicy' Leach was a mechanic here for years. Every time the garage sold, he went with it," said Mingle.
In later years the structure served as a woodworking shop and place where boat seats were made. It also sat unused for a period of time. Then Kent "Smitty" Smith operated a restaurant here until a year ago or so.
This weekday morning in December, Dottie and Thomas Holder drop by for breakfast.
"We're new, only lived here 26 years," says Dottie. "This is the first time my husband has brought me here. I wanted to come but he left early. He told me how much fun it was."
She enjoys eggs, bacon, a biscuit and coffee. "It's wonderful," she reports.
Mingle seems to enjoy the visiting with his neighbors more than he does running the business, as he has to get up from a chair from time to time to allow a customer to pay their bill.
"I may just turn the cash register around and let everybody check themselves out," he smiled.
A warm morning, the first crew of customers has headed out the door to find their seats and catch up on the goings-on.
"This is the liars' hangout," confesses Eugene Harris. "There's always been a hangout here."
Harris ran a thriving auto-parts store here decades back, but when the new Highway 96 bypassed the town, his business and that of others on the main street plummeted.
Practically all that is left near the heart of the community originally known as Auburn is the post office, the elementary school, a beauty shop, a stainless-steel manufacturing company, the library (inside the old 1922 bank building), several churches and Jimbo's.
As for the name change the story goes that Auburn was rechristened Auburntown around 1919 because there were towns named Auburn in Kentucky and Alabama, and a lot of their mail wound up here in Cannon County, Tennessee. A number of the locals still call the place Auburn, USPS be derned.
"At one time this was a thriving little town," said Robinson.
"That highway killed it," Harris professed.
"At Christmas time they'd have a drawing here in town, and there'd be such a crowd that you couldn't drive through," said Robinson, recalling the 1940s and '50s.
"It's a good little place to live," said Harris, who can tell you exact distances to the neighboring communities.
From here it's nine miles to Woodbury, 12 miles to Alexandria, 18 miles to Smithville and 18 miles to Murfreesboro.
But for all the folks sitting around at Jimbo's, inside and out, well, they don't have to drive anywhere. They're enjoying the scenery, the conversation and the company and feeling quite at home, thank you.
Read more from:
COURIER SPOTLIGHT
Tags:
Auburntown, Jimbos, restaurant
Share: