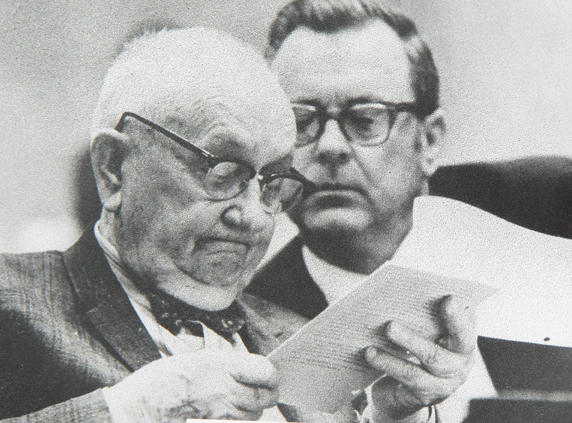 Woodbury's historic newspaper recorded a new bit of history this week as a father and son who were once owners/publishers of the Cannon Courier were inducted into the Tennessee Journalism Hall of Fame.

Former Courier owners/publishers Minor Bragg, the father and his son John T. Bragg, were among the 2015 class of inductees of the TJHOF, a non-profit independent hall of fame based within the John Bragg Mass Communications Building at MTSU. Both Braggs are deceased.

Minor Bragg earned his fame at the Cannon Courier before founding the Rutherford Courier in Murfreesboro. His son, John, stepped into the newspaper business as a youngster before growing into fame as a Tennessee state Legislator.

Both Braggs were inducted into the Journalism Hall of Fame Tuesday, Aug. 11 during ceremonies at Murfreesboro's Embassy Suites as part of the 67th annual Tennessee Association of Broadcaster's annual conference. This will be the third class of inductees but the first in which all recipients are being recognized posthumously.

"In the earlier era of newspapers, it wasn't unusual for multi-generations of a family to be involved in newspaper ownership," noted current Cannon Courier owner/publisher Ron Fryar, a founding board member of the TJHOF. "It is however, rare that a father-son duo in such a small community as Woodbury, can have such a lasting impact on the field of journalism, both in writing and in public service as elected officials. As the current owner/publisher of this historical newspaper, I feel honored and humbled to follow in the footsteps of these great men."

As a legislator, John Bragg stood as an important voice for the public.

In 1974, state Rep. Bragg sponsored the Tennessee Open Meetings Act, known today as the "Sunshine Law," which mandates most government meetings must be open to the press and public.

Minor Bragg was publisher of the Cannon Courier in 1923 and later sold it to Bryson's uncle, the late Hayden Smith.

"Minor then moved to Murfreesboro and established the Rutherford Courier near the end of the Great Depression of the 1920s-30s," retired newspaperman Bryson shared. "Minor and his wife, Luree, are laid to rest in Riverside Cemetery west of Woodbury."

John Bragg, who lost part of his right hand as a boy in a printing press at the old Courier, spent his first 13 years in his native Cannon County, before moving with his parents to Murfreesboro, where Minor Bragg founded the now-defunct Rutherford Courier. That Courier was purchased and subsequently closed by the Gannett Corp, owner of the Nashville Tennessean.

Legendary retired Cannon County banker Bill Smith, at age 97, recalls the accident that cost John Bragg part of his right hand.
"After a local physician did the surgery that saved John's hand, when he came back to school, school teachers had John go around to various schools and talk about the accident. It was a big thing, the publisher's son losing part of his hand in a job press," Smith said.
In later years, Bragg turned most of his attention to state government.

"John Bragg distinguished himself in another form of public service as a state legislative reformer and expert in government financing during a 30-year career in the Tennessee House of Representatives," noted Woodbury Mayor Harold Patrick, who often worked with Rep. Bragg in legislative issues. "Although John never represented Cannon County in the Tennessee Legislature, he never forgot his roots, including helping fund and secure the nice, modern four-lane state Route 70S between Woodbury and Murfreesboro, which links our industry to Interstate 24.

"As a community, we owe a lot to the Bragg family, including John's sons, David and Tommy Bragg, who later owned and published the Courier during the 1980 and 1990s. As you can see, most of our buildings on the Square are full and our industries are performing at their peak and a lot of that is due to that 16-mile stretch of four-lane road from Edgefield west of Woodbury to Mercury Boulevard in Murfreesboro. The road, which opened in 1987, rightly bears the name today, 'John Bragg Highway.'"

Rep. Bragg was also a popular after-dinner speaker throughout the Volunteer State.

One of his favorite stories involved legendary country music performer, Uncle Dave Macon, another famous former resident of Cannon County.
"It was in the 1930s when Cannon County mule man Uncle Dave was becoming the first national 'super star' on the Grand Ole Opry, he was asked to perform at the One Gallus Fox Hunter's Club in Eagleville" Bragg shared in an interview he did with this reporter in the 1990s. "Leading up to the meal and his performance, Uncle Dave said he noticed several of the fox hunters going back and forth to their mules and wagons while partaking of spirits out of big jugs. So when the hosts asked if Uncle Dave would like to say the prayer before the meal, the legendary Uncle Dave responded: "No thank you, I don't want God to know I'm here tonight.'"

Cannon County Executive Mike Gannon credits Minor and John Bragg with bringing the historic Courier, which dates back 1884, into the modern era of newspapering.

"They were pioneers who believed in strong community journalism," Gannon accounted. "The Braggs helped usher in the modern-day Courier as we know it now."

All inductees in this class are entering the TJHOF posthumously, including the late Jack Knox, nationally-syndicated cartoonist for the now defunct Nashville Banner and father of Woodbury resident Britt Knox; Kent Flanagan, who served 21 years as chief-of-bureau for the Associated Press in Nashville; Roy McDonald founded the "Free Press" newspaper in Chattanooga in 1933; Bob Parkins was a local dairyman when he and his wife Dorris founded the Milan Mirror (West Tennessee) in 1965; Nashville's Drue Smith was a journalist of many firsts, which made her a pioneer among women in the profession; John N. Popham III was dispatched by the New York Times in 1947 to cover the South. It was an assignment in which he would distinguish himself with his coverage of the civil rights movement and Henry Grantland Rice, an icon among sports journalists who was born in Murfreesboro in 1880. It was Rice who in 1924 named Notre Dame's football backfield the "Four Horsemen.'" His sports columns were eventually syndicated in more than 100 American newspapers..