Boyd officially sworn in as member of 110th General Assembly 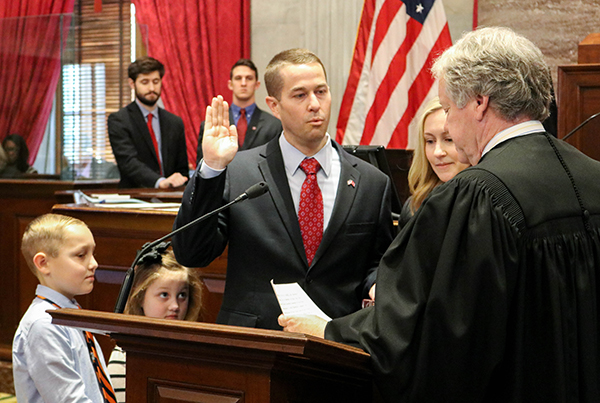 NASHVILLE -- The House of Representatives officially gaveled into session this week, marking the beginning of the second half of the 110th General Assembly in Tennessee.

This year, legislators are looking to build upon the success of the previous legislative session that saw wasteful government spending cut from the budget, taxes reduced for all Tennesseans, measures passed to encourage job growth, and numerous government reforms.

"I am truly honored to be serving the people of our community in the Tennessee General Assembly," said Representative Boyd. "We have a chance to further set Tennessee apart from other states this session, and we are all focused on working as hard as we can to make our state the best place in the nation to live, work, and raise a family."

Clark and his wife Jada have been married for 15 years and have two kids, Wilson and Blair. In addition to many other hats that Clark wears, including that of a little league baseball coach and Sunday School teacher, he is also the owner of an insurance agency in Lebanon.

"Clark's conservative beliefs and small business experience will be a true asset to the legislature and state of Tennessee," said House Majority Leader Glen Casada. "We all look forward to rolling up our sleeves and working with Representative Boyd this session."

"Congratulations to Clark, his family, and his friends as he begins the work of advancing his district alongside members of the House Republican Caucus. Together, we remain committed to advancing Tennessee's values, job growth and prosperity across our state," concluded House Caucus Chairman Ryan Williams.