Boy Scouts to the rescue 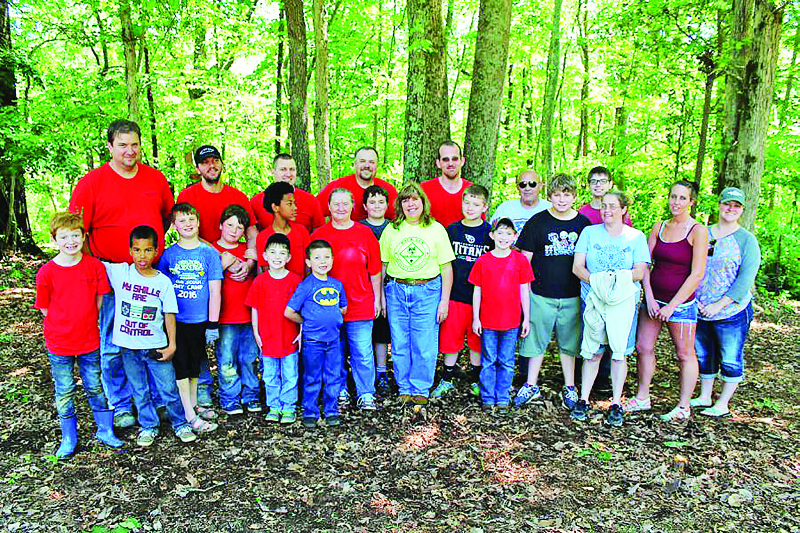 Rhonda Braswell, Scout Leader, Pack 108, from Murfreesboro, and first cousin, Bernie Brazle from Cannon County each had a common goal. It was to place a memorial stone for their great-great-grandfather, Dempsey Braswell in the Braswell Cemetery on Dry Creek Road.

After placing the stone with the help of 8 other cousins in Cannon/DeKalb County, Rhonda decided to go further by creating a "project" for Boy Scouts and Cub Scouts to clear out an L-shaped piece of the cemetery.

The graveyard section in the back and down one side was full of broken limbs, new tree growth and large dead trees.

Troop/Pack 1180 of Woodbury came to her aid, committing to work May 13th, from 8:30 a.m. to 1:30 p.m By noon, the job was finished. Bernie and Rhonda fed them pulled pork barbecue provided by Troop 398, Murfreesboro.

More than 60 bags of leaves were collected and countless limbs and trees were cut and moved off the cemetery site. In the process, the volunteers uncovered some 23 to 26 unmarked graves.

"Although no one will probably ever know their identity, they will no longer be covered by layers and layers of leaves and broken limbs," Rhonda said.
Rhonda and Bernie Braswell each want to thank the Woodbury Boy Scouts and leader Josh Reinhart.

"All the boys worked together as one team to get the job done. Also, thanks to the Kirby family at the Love-Cantrell Funeral Home for allowing them to work on/near their property," Rhonda said.

Thanks to all the Braswell family and close friend, Mike Gann, who cleaned off several of the headstones that had, over the years, turned black and were covered with moss.

Other volunteers came by, bringing water, yard bags and food to go along with the pulled pork and buns.

"Many thanks to the caretakers who have mowed and weeded this small cemetery to keep it year after year. With the rest of it being cleared off, it will be much easier to maintain the rest of the area that has been hidden so long," she said.