Boo! Check out the scarecrows 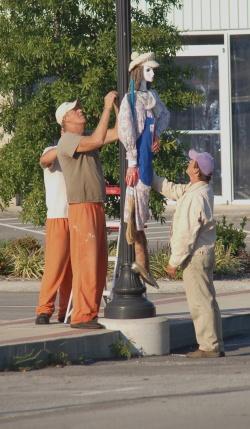 Boo!! It's scary times in Woodbury.

Scarecrows of multiple shapes, sizes and themes have floated in out of the shadows, out of mystical mists and foggy conditions of area cornfields, so to speak, to take "center stage" in Cannon County.
How center stage?

Literally, they're smack-dab in the heart of downtown Woodbury, surrounding Cannon County's beautiful historic and award-winning stately Courthouse and completely surrounding Courthouse Square.
According to the latest list of entries, scarecrows have floated in from scary places as far-away as Gassaway, Milton, Burt and Auburntown, plus from Middle Tennessee's highest fog-shrouded peak atop mystical Short Mountain.

Region's Bank teller Helon Bush created one of the first scarecrow entrants in what promises to be an annual event to help give Woodbury Public Square a festive fall look.

"I worked all one night, to come up with my scarecrow," Mrs. Bush noted as Cannon County Maintenance Director Darryl Fisher helped attach her scary creation to one of the decorative lamp posts that line Woodbury's Courthouse Square.

"I can't wait for the judges to come in and look at our beautiful Courthouse Square, with all the creative entrants," added Mrs.  Bush who estimated she worked at least 2 long hours on her Lady Scarecrow.

"My scarecrow is a theme from the UT Extension Family, Community & Education (formerly the Home Dem-onstration Club) that I belong to and support," Mrs. Bush stitched on regarding her creation.
"The project has not only generated a lot of talk here at the bank, but we've seen several people take their time, and walk completely around our town's lovely Courthouse Square," bank teller Bush accounted.
"It's an event whose time has come," noted Cannon County Executive Mike Gannon. "We've had a surprising number of entrants…"
The decorative idea was born in the minds of Fisher and County Executive Secretary Diane Hickman.
"Woodbury and Cannon County folks take a lot of pride on the appearance of our historic Courthouse," Fisher acknowledged.


"We could not be more pleased with the huge turnout of scarecrows from individuals and some businesses," Hickman hailed.

As of last Friday, the official cut-off date, there had been 22 scarecrows casting their mystical spells throughout downtown Woodbury.

"We hear two or three more scarecrows are on their way, with their creators being a bit tardy," Hickman noted. "We'll end up with 25 to 30 scarecrows before the judging date."

Scarecrows will continue casting their mystical spell over the Courthouse Square through the month of October, according to one spirited supporter of the Scarecrow idea.

"The idea is so popular, we're considering encouraging folks to create seasonal holiday themes on Courthouse Square leading up to Thanksgiving and Christmas," Fisher noted.