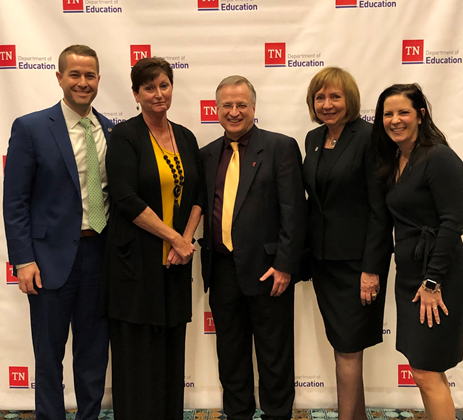 Cannon County Schools Supervisor of Attendance, Coordinated Health and Safety Coordinator Bonnie Patterson was among three honorees honored for their work in Tennessee education during the annual banquet on Tuesday night.

Ms. Patterson who has combined three positions into one has been working in Cannon County Schools for over 35 years serving as a teacher, principal, and working in the central office throughout her career.

Dr. Michelle Goad, instructional supervisor for grades 5-8 and testing coordinator in Gibson County Special School District, was named Tennessee's 2019-20 Supervisor of the Year. Goad has served in this role for 11 years and previously served as a teacher and instructional coach in the district. Goad is committed to providing every student with high-quality education and is always willing to try new initiatives based on teachers' feedback and data.
Both awards were announced at an honorary banquet in Nashville during the department's LEAD conference, a statewide convening for Tennessee's leaders in districts, schools, and classrooms.

"As a former principal, I'm continually inspired by the caliber of principals and supervisors that we have across this great state, and I am truly honored to recognize these outstanding individuals who work each day to make sure our students are receiving the best possible education," said Commissioner Penny Schwinn. The annual Principal of the Year and Supervisor of the Year awards recognize administrators who have helped provide educational opportunities for Tennessee students through leadership, programs, and vision. Ware and Goad were among nine principals and nine district supervisors, respectively, selected as regional finalists after being nominated by their peers for the title.

Director of Cannon County Schools Mr. William F. Curtis commented, "Mrs. Bonnie Patterson is a genuine Cannon County 'jewel.' Her 38 year experience as elementary teacher, high school teacher, assistant principal, principal, and supervisor demonstrates commitment to Cannon County students. She serves not only as Supervisor of Attendance, Coordinated School Health, and Safety Coordinator, but as a literal 'social worker' for every student in our school system. We are ecstatic that Mrs. Bonnie is the Middle Grand Division winner, but she is a 'winner' to all students. She is a humble personification of our MISSION - 'Preparing ALL Students for their Future' through our VISION - 'Engaged in Excellence Every Day!' All of our Cannon County Schools family are celebrating today!"