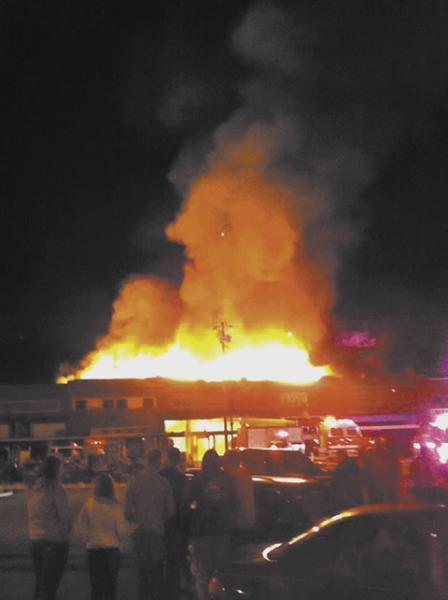 Questions are still in the air following a serious Friday night fire on the south side of Woodbury's Square.
Two consignment shops, Hope and Faith and Off the Hanger, are a total loss and other stores suffered smoke and water damage.

Question No. 1: What caused the fire?

There's been all sorts of speculation. We've heard that it started in the warehouse, that a wiring issue started it, said Leeanne Simmons, the daughter of Glenda Harris Davenport, who operated and was part owner of the two consignment shops.

"But we won't really know until the state fire marshal comes and determines the cause," Simpkins said.

The roofs collapsed on both consignment shops and the interiors are charred almost beyond recognition. A warehouse located behind the two shops was completely destroyed. The only thing that was left was twisted bits of tin roofing.

Pointing to a blackened rack, she said, "That's where we had our wedding dresses and there's nothing left."
"That was my ugliest mannequin and it survived," she said pointing next to the door.

"The firemen when they entered the building thought it was the body of a person who was killed by the fire," Mrs. Davenport said. "But fortunately, no one was hurt."

"We just lost things…and things can be replaced," her daughter said.

"This is so shocking," Mrs. Davenport said. "This is something that happens to other people and not to you."

Off the Hanger was home to four different shops. There was a dry cleaner referral business and Rannie's alternations shop, along with Always Buying Gold. It was a complete loss for all of them.

"We did lose some gold, but that was nothing compared to Glenna's losses," said Jeff Pyles of Always Buying Gold.

Mrs. Davenport has no idea what will happen in the months to come.

"I can't even think about it at this point," she said.

Question No. 2: Was Woodbury's Fire Department sufficient to put out the fire?

Woodbury Mayor Harold Patrick said he didn't want to belittle the losses, but added that it could have been much worse.

"The ladder trucks are what saved us. Without them, the whole Square might have gone up," the Mayor said.

Woodbury doesn't have a ladder truck or snorkel that can reach over the fire and spray water on it.

"All we could do was go to the front of the buildings and spray water through the front," Patrick said.

"But thank goodness, Rutherford County and Manchester came to our aid and were able to knock the fire down with their ladder trucks," he continued.

Woodbury and Cannon County need to get together and obtain a ladder truck. This was Woodbury's second fire like this in recent years, Patrick said.

"We won't be able to afford a new ladder truck, but we need to do something soon before this can happen again," he said.
Building owner Steve Fuson was at the fire scene Saturday morning with insurance agents to determine what will be done with the two, heavily damaged buildings. There is a good chance that both will be declared a total loss.

Tangles hair salon, located next to Hope and Faith, suffered moderate damage with fire fighters and volunteers salvaging much of the equipment out of the salon. The two-story building was once home to Fuson's 5 and 10 cent store. The top story was home to Fuson's annual Christmas village.

The two buildings that were lost were one-story structures.

Adjacent to Tangles was the Bean Pot gift shop, which suffered smoke damage. Owners and their family members were busy Saturday removing the contents of the store for storage until the building can be repaired.

The Bean Pot building was the former home of Banks Hardware Store where the pot-bellied woodstove was a popular gathering place on cold winter days.

Located next to Off the Hanger is the future home of Cannon Arts Studio, which is currently being refurbished. That building had a fire break and a metal roof.

"They just asked the fire department to spray water on the roof and it held up fine," Mayor Patrick said.