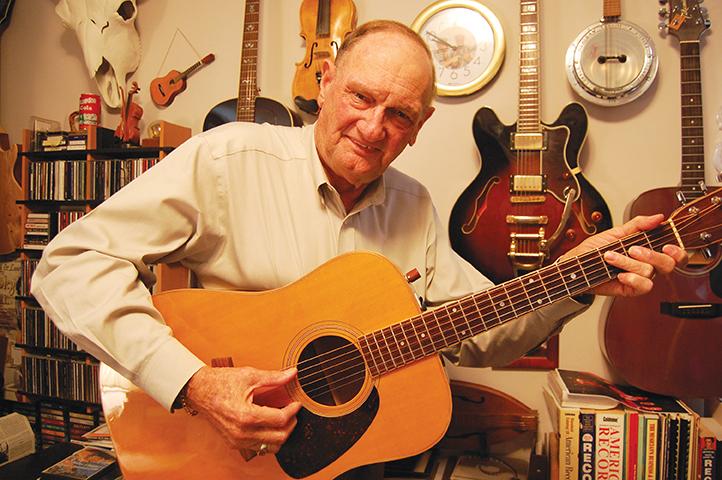 Murfreesboro's Billy Henson picks the guitar in his man cave.

Whether he's holding his guitar or the Bible, Murfreesboro's Billy Henson delivers messages from the heart.
Henson, 76, has been performing country music for more than 60 years and been filling the pulpit since the mid-1980s.

The singer-songwriter entertains frequently at the Bell Buckle Café, while he preaches three Sundays a month at churches of Christ in Cannon County.

"I like to be in places where a couple of hundred people are enjoying a meal and just want some entertainment," he says of the type of venues he plays. "My days in night clubs and skull orchards (horrible dives) are over and long gone."

As for his more recent vocation as minister, he notes, "I never claimed to preach. I considered myself just a fair fill-in speaker, but I've baptized a lot of people, married several and buried a bunch."

Making music across seven decades, Henson never quite hit the big time but he came close, giving it his best shot.

"I was always a fringe artist, never in the middle of the big stuff, always on the edge of making it," he says, speaking the gospel truth.

He came closest in 1963 when he recorded an album on the Nugget Records label and had a single, "Caution Heart," that got heavy airplay on country radio stations across the U.S. The tune did well enough to propel him center stage on the "Grand Ole Opry" that fall, a memory that he holds clearly and dearly.

"Hank Snow gave me a really big introduction. I was euphoric. I thought I was probably the biggest thing going," Henson said with a laugh.

The only child of Monroe and Sarah (Overall) Henson, Billy watched his parents' marriage fall apart before he turned 12. His father, a talented baker at the Sally Ann Bakery, later served in the Army and worked as a fender and body mechanic, but his heavy drinking took its toll.

After the couple divorced, Billy's mom turned to waitressing tables at Al Sullivan's restaurant. She and Billy lived near a corner grocery store that doubled as a sort of pawn shop.

"Mr. Eddie Fleming had a little ole guitar. I would go over there and play on it," recalled Henson. "Mr. Fleming said, 'I'll sell you that guitar for $6 and you rake leaves and cut yards and you pay me 50 cents a week.'

"And then I didn't know how to play it. Eddie's wife, Rozie, took a sheet of paper and drew out the neck of the guitar and the frets and taught me three chords from that sheet of notebook paper. I just took it from there."

At 14, Henson began picking flat top guitar with Carl Tipton and his Mid-State Playboys on WGNS.

"My mother let me go out and play with Carl at his square dances and VFW clubs. We didn't go into beer joints. I was no major contributor to the band. I made some noise and sang," he said.

Through Tipton, Henson became acquainted with Goober and the Kentuckians and wound up singing with the group on the WSIX-TV show, "The W6 Ranch Round-Up," and he also played with Ralph Sloan, the "square dance king" at dances at Cedars of Lebanon State Park and at Cumberland University in Lebanon.

In the meantime, he and some pals at Central High formed a string band and played for pie and chitlin suppers. Placing third in a local talent contest, the group won a 50-pound sack of hog feed, a unique payday indeed.

It was while playing a square dance in the Buchanan Grammar School gymnasium that Henson discovered a pretty little girl named, Patsy, who became the love of his life. Rendezvousing afterward at Lamb's Grill, he asked her out.

"We went to a movie for our first date and that night we decided to get married," he remembers. After courting for three years, they married on Jan. 1, 1960.

While studying at Knox Business College in the Boro, working for a local appliance company and serving in the Air Force Reserve, Henson met songwriter Charles Snoddy, who had written a song for the country duo Lonzo and Oscar. He carried Henson to meet the entertainers, who listened to a couple of his songs and then signed him to a publishing contract.

In 1962, Oscar told Henson, "You need to be on a record," so he recorded four songs and then an album on Nugget Records, and several of the tunes did well on regional charts, which led Henson to touring with the act. (Brothers Johnny and Rollin Sullivan performed as Lonzo and Oscar, respectively). That included two tours of Germany.

Once back stateside, Nashville promoter Bob Neal had Henson on the road playing package shows with stars like Pee Wee King and the Golden West Cowboys and Whitey Ford (the Duke of Paducah). Next, Smiley Wilson booked him to tour with Red Foley, Martha Carson, Cousin Jodie and other acts. By the mid-1960s he performed at military bases from Maine to Florida with his own Billy Henson Band.

In 1966, Henson's career was stalling out and his father-in-law took a job in California.

"I was having trouble keeping the band paid and paying the bills at home. Patsy was wanting to go out there and see her parents. I thought it might be a good time to get away," recalled Henson, so they moved to Los Angeles where he worked at a steel fabrication plant by day and sang seven nights a week in clubs along a 200-mile stretch.

Six months later, December of 1967, he had had enough.

"I decided then to hang it up. The old game out there about wiped me out," he said. "You know the music business is full of bums and cheats and scoundrels, but I was fortunate to meet so many good people in the business."

Returning to his hometown, Henson worked as a cost accountant at Perfect Equipment for 10 years, and from the early 1980s until 1989, he and Patsy operated an office supply store, Hassco, on the square. Closing the store in 1989, he worked for Ambassador Printing, selling office supplies and furniture until retiring.

It was in the mid-1980s that he stepped into the pulpit.

"I helped build a church, Bellwood church of Christ. I taught Sunday school class and gradually began doing a little speaking. Somebody called me and said, 'We need a fill-in preacher.'"

Henson has since delivered sermons at 17 congregations across Middle Tennessee and has now settled in to be sort of a circuit preacher at rural churches in Cannon County. His schedule goes: first Sunday of the month at Sugar Tree Knob church of Christ; third Sunday: church of Christ at Wood; and fourth Sunday, Curlee Church of Christ. (On the second Sundays he and Patsy attend their home congregation, the Bethlehem Church of Christ).

Of being a traveling preacher's wife, Patsy says, "I love it. We get to see these people once a month. When you have someone who preaches like Billy, who touches your heart, and people come forward to ask for forgiveness. He seems to touch people everywhere he goes, and it just does your heart good."

Patsy, who presented Billy with two daughters, Laurie and Jennifer (who died of brain cancer three years ago), confessed the early years of marriage, when he was on the road for weeks at time, were difficult.

"There was loneliness. It broke my heart because I was so young and didn't know how to deal with a marriage by myself. When you have a talent like Billy, the music in his soul has got to come out. You don't sit on it. And I'm his biggest fan," she said.

Clearly, Henson couldn't leave his music behind for good.

"That old urge kept coming back. I was wanting to increase my music activity, and since I retired that's about all I been doing," he noted.

He and his band SummerStorm have upcoming shows Oct. 24 and Nov. 28 at the Bell Buckle Café and Nov. 14 and Dec. 19 at the Donoho Hotel in Red Boiling Springs.

Henson describes his vocal style, saying, "I'm just a ballad singer. There's no smoke and lights and bells and whistles to me. I just sit up there and sing songs that people remember."

As for his biggest reward in entertaining, he says it occurs, "When somebody comes up and says you did my mother's favorite song. It all has to do with memories."

Henson has composed more than 100 songs and seen 52 of them recorded by such singers as Loretta Lynn, Ernest Tubb, The Osborne Brothers, Jim & Jesse, Pete Drake, Lonzo & Oscar, Herb Pedersen, and the Bluegrass Alliance (Vince Gill's early bluegrass band), and others.

"Lonesome Feeling," the song he considers his best, has been recorded by more than 30 artists, most recently by the Josh Williams Band and the Travelin' McCourys.

Henson recorded two albums, 47 years apart. His most recent, There Is a Time, features two standout tunes, "There Is a Time," popularized by The Dillards as the Darling boys on "The Andy Griffith Show," and "In the Whispering Pine," his own composition.

Currently serves his second term as president of ROPE (Reunion of Professional Entertainers), which has 800 members, he has memories enough to fill a book. (Ask him about the day in 1952 when he met Hank Williams at Uncle Dave Macon's funeral at the First Methodist Church in Murfreesboro.)

Henson figures he will keep on making country music sounds and delivering sermons until it comes time for him to cross the Jordan.

"In two more months, I'll be 77. In my mind I feel like I've got 20 more years to play music, sing, entertain and preach to people, too," says the good man who lives by the Good Book.