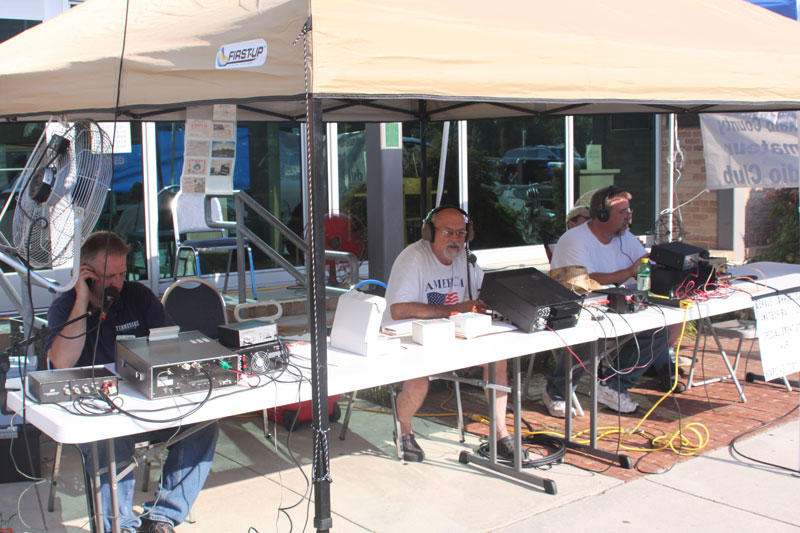 CCHS teacher Freddy Curtis, far left, was among those who participated in the event.
The DeKalb/Cannon County Amateur Radio Club conducted a Special Event Station at the 41st Annual Smithville Fiddlers’ Jamboree and Craft Festival on Saturday, July 7th, 2012.  This year marked the thirteenth year that a special event station had been set up at the Jamboree.

The station was setup at the front entrance of the Justin Potter Library during the early morning hours on Saturday.  Antennas were assembled, radios were properly checked, and transmissions were begun at 7:30 AM local time.  Operations took place in the 20 meter, 40 meter, 15 meter, and 10 meter Amateur Radio bands, and the station was publicized in Amateur Radio magazines QST, CQ, and the club website.

The station contacted 202 total Amateur Radio Stations in 35 States, and Ontario, Saskatchewan, and Quebec, Canada.  One interesting contact included the Ham Station at the Hands-On-Museum in Ann Arbor, Michigan.  Stations were also contacted in Nicaragua – Central America and Havana, Cuba in the Caribbean.

The local club looks forward to operating another special event station at next year’s Smithville Fiddlers’ Jamboree and Craft Festival.  The club would like to offer its thanks to Jamboree Coordinator - Mr. Jack Burton, Justin Potter Librarian - Mrs. Kathy Hendrixson, and the Smithville Post Office for their support of this activity.

The DeKalb/Cannon County Amateur Radio Club is an organization of Amateur Radio operators from DeKalb, Cannon, and Surrounding Counties and is an affiliated club of the American Radio Relay League.  The next club meeting will be on Thursday, July 26th, 2012 - 6:30 PM at the DeKalb County Center, 722 South Congress Boulevard, Smithville, TN.  Any person interested in Amateur Radio is invited to attend.