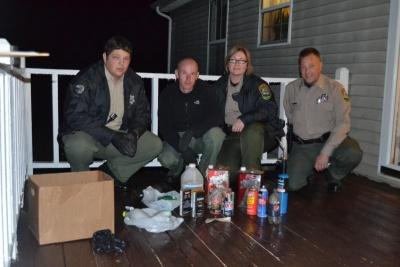 By MIKE WEST Courier Editor
A Judge Purser Road resident who claimed he was fighting allergies was arrested by the Sheriff's Department on meth-related charges.

Barry C. Bogle told investigators that he had repeatedly bought medi-cines containing pseudo-ephedrine due to his allergy problems. A check with NPLEx confirmed that.

However, investigators suspected Bogle was using the allergy pills for something beside allergies and obtained search warrants for his home and a nearby red barn.

Inside the home, Gullett and McCormick found the makings of a one-pot meth lab, along with two pistols and other drug-related materials.

"I was then contacted by Deputy Jordan McGee that he had located several items inside the barn," Gullett said "Once in the barn I was shown several burn piles that had been covered up with wooden boards."

Gullett asked Bogle about the discoveries. Bogle said "he wasn't sure about anything that that was found and that he purchases pseudo due to allergy problem."

Bogle also claimed that he didn't know how to manufacture meth.

He was arrested and charged with initiation of methamphetamine manufacture and with maintaining a dwelling. A hearing is set for Dec. 17 in Cannon County General Sessions Court.

In another case, a suspect ended up on a Crossroads with the law.

Sgt. Tommy Miller was dispatched to Crossroads Road to check on an apparently intoxicated male who was riding a horse.

Bypassers had discovered the man lying in middle of the road with his horse standing nearby in the ditch.

Miller got the man identified as Michael Peter Vargo Jr.

"I asked Mr. Vargo how much he had to drink and he stated two beers. Mr. Vargo was unsteady on his feet, having to have help standing up and had a strong smell of an intoxicant," Miller said.

Vargo told Miller that he had ridden the horse from Centertown. He was charged with public intoxication.