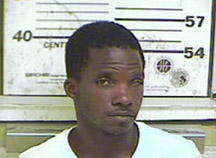 The third suspect who was the alleged gunman in the Cash Express robbery in August has been arrested in Savannah, Ga., according to Woodbury Police Chief Kevin Mooneyham.

Anthony Threatt Robinson, 38, has been charged with a number of counts, including felony murder, in Savannah, Ga., following an armed robbery at a gold store that left his alleged accomplice dead in September.

He was served with a warrant at the Chatham County Detention Center in Georgia for those crimes.
"Patrick Fann did an outstanding job of working the case, developing suspects and making arrests (locally)," Mooneyham said. "I also extend our gratitude to law enforcement in Murfreesboro and in Georgia who assisted in this case."

Savannah-Chatham Metro Police said he sped off with accomplice Lamar Carter, 35, who had been shot during the altercation.

Carter was found in the pickup with a gunshot wound. He was declared dead at Memorial University Medical Center.

Police said after Robinson crashed the pickup truck into a house, he fled and was captured by police officers who took him into custody.

Robinson was initially charged with driving without a permit, fleeing to elude, failure to maintain lane, driving too fast for conditions, reckless driving, failure to notify after striking an object, failure to yield and obstruction. He was later charged with murder after Carter died from gunshot wounds sustained during the robbery.

"He was involved in activities that led to the death of someone," SCMPD spokesman Julian Miller said. "As such, he is somewhat responsible."

Police continue to investigate. Robinson, Coleman and Randolph are believed to be members of the Grape Street Crips gang, which operates out of the Los Angeles area of Southern California.