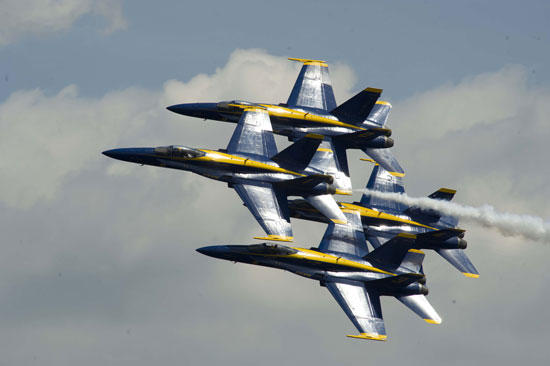 “Our granddaughter Rebecca’s husband, Air Force Capt. Andy Aduddell, flies and instructs pilots in F-16 fighter jets based at Luke Air Force Base in Arizona, where the Flying Thunderbirds also train and are based,” noted Goad.

“Capt. Andy performed in his F-16 two years ago at our great airshow when the Blue Angels were again here in Smyrna,” the grandfather noted. “It was a great personal thrill for Wilma and I, as we watched Andy, in his F-16, roll down Smyrna Airport’s long runway, and then soar straight up, out of sight from us folks on the ground. Plus, we’ve had dinner with Thunderbird pilots and wives when Wilma and I visit our granddaughter in Arizona.”

The 84-year-old Goad’s “love of flight” goes back to teen-years in rural Maury County.

“At age 17, I made my ‘solo flight’ on July 13, 1945, at Mt. Pleasant, Tenn., where I was a “flunky” for the airport’s fixed-based-operator,” Goad soared back in time. “I paid for my air instruction, by washing airplanes, spinning propellers to start engines, and serving as assistant mechanic.

“My solo flight was in an Aeronca L-3 a surplus aircraft that had served as an artillery spotter plane in WW II,” Goad shared.

Capt. Aduddell is slated for a six-month tour of duty in Afghanistan starting in June.

It takes many teams of flight professionals to stage the Great Tennessee Air Show?

Meet the Leap Frogs, the official U.S. Navy Parachute Team that consists of 14 jumpers, leaping out of an aircraft at an altitude of 12,500 feet. During free fall, jumpers reach speeds of 120-MPH, and can accelerate up to 180-MPH by pulling their arms to their sides and straightening their legs into what is called a “tract.”

“Jumpers typically open their parachutes at around 5,000 feet, by releasing a smaller pilot chute, which deploys their main blue-and-gold canopy,” described Smyrna Airport Executive Director John Black. “After deploying their chutes, the Leap Frogs fly their canopies together to build dramatic canopy-relative formations.”

There are also ground-and-air “high-octane” thrills.

For this, Great Tennessee Air Show act, driver/pilot Neal Darnell goes at record ground speeds. How does this happen at an air show?

Major military flight history in Smyrna started back in early 1940s, when the late Smyrna resident Edwin Smith and hundreds of other Rutherford-area civilians were “contracted” to clear the thousands of acres needed for construction of the Army Air Corps’ Base.

“I had a little Ford tractor with a scoop, so they contracted with me to help level the land where the long runways were to be built,” Smith shared in an interview he granted to Middle Tennessee news media back in 1989.

In addition to daring precision flying, the air show this year will feature more than 40 “static displays” of military aircraft for show attendees to walk up and investigate.

“Plus, we have the always popular “Kid’s Zone” for children to enjoy throughout the two-day spectacular,” Black included.