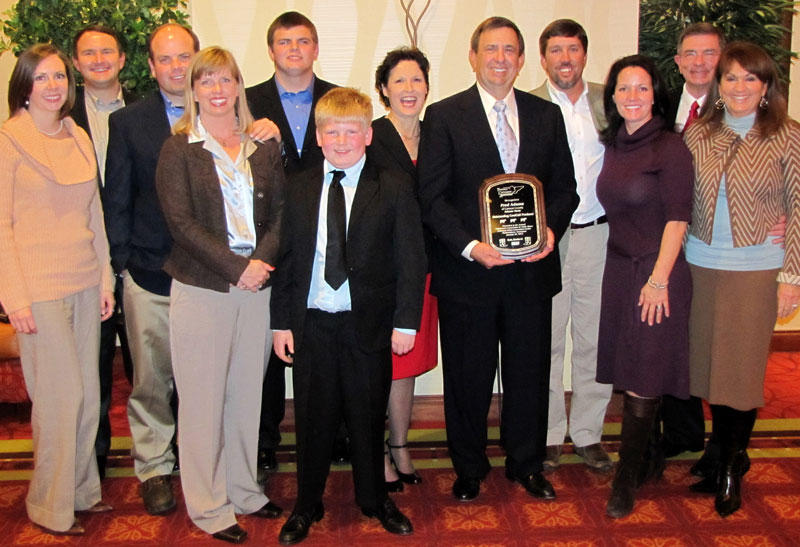 Fred Adams received the 2011 Tennessee Cow Calf Producer of the Year Award from the Tennessee Cattlemen’s Association at their recent State Convention help at Embassy Suites in Murfreesboro.

Adams resides in Readyville, TN, with his wife Cindy.  His family also  includes: two daughters Melissa and Laurie; a step-daughter Sara; sons-in-law Johnny and Greg; and grandsons Mitch and Evan.

Fred’s love of farming began at age 15 when he helped his uncle on his cattle and dairy farm. In 1967 Fred purchased a farm in the Bradyville community in Cannon County where he and his wife, Kitty, raised beef cows and sheep. During that time, he also attended MTSU and earned a Bachelor of Science degree in Animal Science. In 1978, he moved to Readyville, and has lived and farmed there since that time.

Fred farms over 700 acres, 170 of which are used to grow and sell hay. His cattle herd includes 175 cows, and approximately 150 calves are marketed each year.

According to Dr. Jessica Carter, Associate Professor of Animal Science at MTSU, “The unique part about Fred is that he is continues to expand his knowledge of beef cattle production and is willing to try new things. He continues to find ways to improve his beef cattle operation and is a valuable asset to the agriculture community.”
Bruce Steelman, Director for the UT Extension in Cannon County, states that Fred “is an innovator in the beef industry excelling in genetic improvement in his herd, conservation minded with an effective marketing strategy.  Anyone with the good fortune to work with Fred will soon realize the work ethic and commitment he has for the beef industry.”

Fred Adams is a lifelong student of agriculture and the beef cattle business. To find out exactly what kind of cattle and beef he was producing, he participated in the Tennessee Beef Evaluation. He sent a sample of his calves to Iowa to be custom fed and processed. He received a great deal of information to help make management decisions in his beef herd.

Furthermore, he was quick to grasp price risk management concepts to manage the risk of retained ownership. He  has cooperated in several demonstrations to help himself and other producers learn new management practices to improve profitability.

Some of Fred’s efforts to improve his operation and to make it more efficient include:

• A record-keeping system that includes freeze branding his cows and heifers.

• Implementation of a rotational grazing program with the goal of development into a year-round pasture program.

• Use of a natural spring on his land to enhance the rotational grazing system and to facilitate weekly movement of cattle.

• Management of a fall calving operation and artificially inseminating his heifers and cows to promote calving by mid-December. This allows him to also breed to top quality Angus bulls.

• Use of Agriculture enhancement funds to build a commodities shed and hay barns to enhance animal health.  With these funds, Fred has also purchased and covered WW chutes and working alleys, and scales have been installed at the main farm.

Bruce also stated in his letter of support, “Fred Adams is an excellent candidate for the 2012 Tennessee Cattlemen’s Association Outstanding Cow-Calf Producer of the year. While many producers “talk the talk” Mr. Adams actually “walks the walk”.