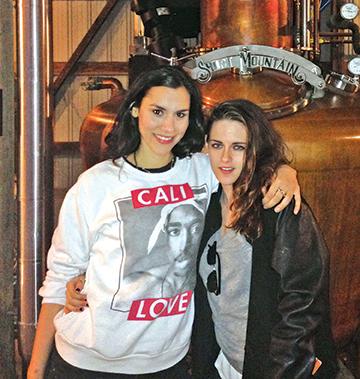 Back on a cold afternoon in February, Short Mountain Distillery had some serious VIP visitors.

Kristen Stewart, star of the Twilight series of movies, made her directorial debut creating a video for friend Sage Galesi of Sage + the Saints, a Nashville country band, on the farm where the distillery is located in Cannon County.

“We chose Short Mountain because it’s a place where our fiddle player Maria and I had spent a good amount of ime,” noted Sage. “It’s a beautiful Southern landscape, and the song, called ‘Take Me to the South,’ is about how all the glitz and glamour of big cities don’t intrigue me like the laid back culture of the South.”

Stewart co-directed the video with David Ethan of Starlight Studios. Shapiro and his team at Starlight  produced the video using funding from Buffalo David Bitton clothing brands’ “Blank Check Series.” The company is giving moderate
sums to artists to tell stories in different formats. Rapper Macklemore and producer Ryan Lewis recently used some of these funds to release a short docuseries about their life on tour.

Sage has been a friend of Stewart for a number of years, and according to a recent story in Rolling Stone magazine, she is the one who talked Stewart into fulfilling a dream she has had since she was 10 years old of directing. According to Stewart, Sage told her to “just do it.”

Soon they found themselves away from the LA glamour and out in the muddy foothills of the distillery’s farm with the sheep and warming themselves by hanging around the still.

“We love the moonshine and everything the distillery at Short Mountain does,” Sage said. “They were good enough to help produce the video and provided us with everything we needed to create an authentic country feel for the
video. They have a great piece of land and their interest in music artists fits so well with what we are doing. They have a new stage they have built at the distillery where up and coming music artists will be able to perform. We are planning to have a premier party for the video there soon.”

“Take Me to the South” will be released in about two weeks. It will be available “everywhere” according to Galesi. The song will be part of an independently produced cd available for pre-order at http://www.pledgemusic.com/projects/sageandthesaints.

For more information about Short Mountain Distillery, moonshine and how to enjoy this slightly wicked
back hills brew, go to www.shortmountaindistillery.com.