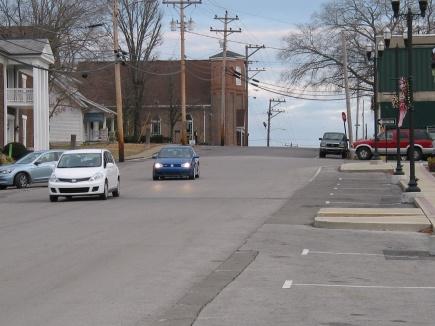 Imagine that you had the power to pick the route for an expanded state Route 70 in Woodbury.

Would you build the road straight through town? Or maybe you would prefer a route that ran north of town near the Industrial Park at Stones River Hospital?

But let's not forget Woodbury's south side. Perhaps running a four-lane though there would help the city grow?

The state of Tennessee is open to several options when it comes to expanding Highway 70 in Woodbury, State. Rep. Mark Pody said Monday. But before any option is considered, taxpayers need to decide the right path.

Tennessee Department of Transportation has taken the stance that the local community should approve the route before any action is taken," Pody said.

So is there a rush for approval?

Funding is not currently available for the project which would connect the new four-lane version of state Route 70 with John Bragg Parkway.

"I'm not saying it is completely dead, but we are not at the head of the list," Pody said.

It's important that Woodbury residents look ahead to the future, the state representative said.
"We must make the decision for our kids and our grand kids on what is best for the future of Cannon County," he said.

The road needs to be completed and that is the state's goal, but it should not be done without input from Cannon County taxpayers. Naturally, there is some division on what path should be pursued, the representative said.

The town of Dickson had a similar dilemma and they decided to improve the existing roadways and route the traffic through their downtown. This is being done along with a new traffic plan that coordinates signals and flow, he said.

"I'm not saying we can or should consider that, but we do want some local agreement on what would be best for Woodbury," Pody said.

At any rate, no funding is currently available for the project, but it would be best if Cannon County could reach an agreement soon on a path, he said. The state is funding projects based upon local agreement.
"They are not going to force it down anyone's throat," he said.

The need for new and expanded roads in the Volunteer state is great so other counties are going to move ahead if they can reach a consensus.

What Woodbury must do is reach a consensus on the best path.  This can be done by having a public referendum or if the consensus is overwhelming by a vote of the county commission, he said.

Print
Members Opinions:
hoghito
[Delete]
I am so happy that something is in the works!! Planning and decisions are forthcoming.
[Delete]
The option to have two lanes of the 4 lane on Main St and two on Water St. seems to be a logical choice with the least disturbance to the community. It also has the added affect of exposing the traffic that passes through town and Water St to existing, as well as new, businesses. This is an opportunity to revive Woodbury! If the Square is bypassed it just might be the final nail if our Main St businesses. Look at all the little Main St communities that have died because of being bypassed. Just my 2 cents worth.
appdancer
[Delete]
I agree, Ms. California!
[Delete]
The daily flow of dekalb commuters, who most wouldn't stop for any reason, on their way to Murfreesboro or back home do nothing but congest our small town.

Routing thru town you could get so much future traffic that patrons wont stop because of inconvenience. it would also be very inconvenient to us locals trying to conduct daily business.

I believe the antique/ boutique stores (which it appears our sqaure is evolving into) will have little to no effect with possable increase in floor traffic because of ease of entry.

Diners and fast food would also have a negative effected but i believe hometown restaurants could also benefit from ease of entry.

Gas stations/ convenience stores would have the greatest negative effect by diverting traffic.

I would also guess the pay-day-loan businesses (5 that i can think of) would be hurt but that would be a good thing for our community.

Many of our food and gas retailers would relocate to the booming new area at the intersection of by-pass and 53 S.

I am not a traffic flow specialist but i do believe going thru town would be a bad move. I also believe if you look at a map, to the south is shortest route and would guess most economical.

I do know one thing for sure: many people, some with more influence than the rest, will make or lose substantial amounts of money base on the route taken and these voices will be the loudest. Eventhough they will shout what is best for our community, their agenda will be monetary.

I welcome the improvement whichever route is chosen and am confident it will benifit our county now and in the future.

sinkhole1959
[Delete]
This should not be left up to a public vote. Because everyone will vote for what is convenient to them and not what is best for Woodbury. It just needs to be a logical and cost effective decision based on future growth.
The route through town is ridiculous at the least. The current roads through town cannot be widened enough to handle both the flow through town and the ability to exit easily into businesses. The design of Woodbury would only lend to moving existing businesses away from the road and rebuilding. That would be a huge undertaking. Who is going to go down this new 4-lane highway and still have to slow down to 20mph in Woodbury to allow access on and off the highway inside the city.
Woobury needs to be a "destination" that we all drive in to for shopping, church and other events from the local residence. It does not need to be a forced bottleneck in a large traffic flow. This needs to be decided by those that are working on city growth and economic planning.
But that is the great thing about these opinion sections. We all have one, including myself.