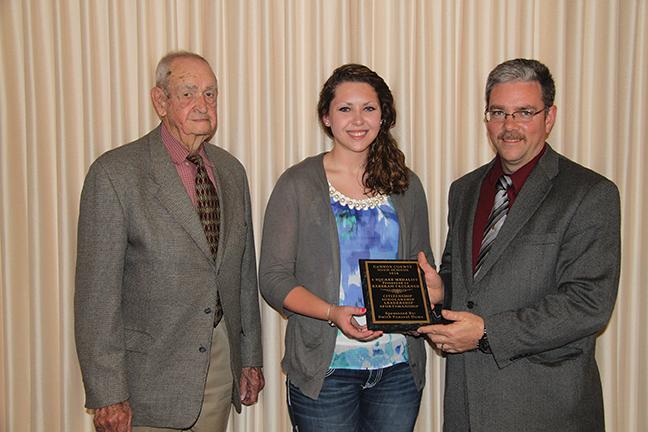 Rebekah Faulkner knows enough about the history of the 4 Square Award to realize its significance and importance to the recipient.

Faulkner, the daughter of David and Rene’ Faulkner, became the latest in a long line of recipients to receive the honor when she was named winner of the 4 Square Award during Senior Awards Night at CCHS.

“It was really humbling when my name was called out,” Faulkner said. “Before we left for the awards banquet I remember telling mom the only award I really cared about was the 4 Square Award. She asked me why and I told her this would make me feel like I achieved something of importance. I believe it reflects all of the hard work I have put in through high school.”

The 4 Square Award is given annually to a Cannon County High School student who excels in four areas – scholarship, citizenship, leadership and sportsmanship and is awarded by Smith Funeral Home.

The award originated in 1927 and is the longest-running honor bestowed upon Cannon County graduate. It was started by Stanton Smith and continued by his son, Bill.

“I believe the award has a special meaning because of its importance,” said Bill Smith, who continued the award during his time as President of Commerce Bank and continues to support it as co-owner of Smith Funeral Home. “This award has been given continuously since 1927 and it became the most coveted award in the school. It makes me proud of the school and all of the students who have received it.”

The honor has been bestowed upon 87 graduates since its inception in 1927 and the list includes a “Who’s Who” of recipients. Current Director of Schools Barbara Parker was the winner of the 4 Square Award. Successful businessman Stanton Barney Bragg was the first male recipient.

“The award has a well-storied history,” said Smith Funeral Home co-owner Tim Gentry, who makes the presentation. “It is the most coveted award given, by far, because of its history. Several winners have gone on to do well in business and other aspects of life after receiving it.”

Faulkner won out over several other quality candidates in 2014. The two-sport athlete also is one of the top students in her graduating class. Faulkner is the top female graduate in the Class of 2014 and ranks third overall. She sports a 4.0 grade point average and will attend Sewanee – The University of the South on a women’s basketball scholarship. She also was a standout volleyball player at CCHS.

Being able to successfully balance academics and athletics, as well as her social life, enabled her to land the 4 Square Award.

“Since I was little my parents would push me to do well,” Faulkner said. “They wanted me to be successful. I tried hard to do the right things and work toward a quality education.”

Faulkner aspires to be a teacher and would like to coach girls basketball.

Winners of the 4 Square Award have to be solid in four specific areas. It is not enough to be a good student but a poor sport in the athletic arena. It is vital the recipient be strong in all four areas represented by the four squares.

“It is not just one or two areas they look at,” Gentry said. “The winner has to have all four areas and be strong in all four. You can’t just halfway do things. You have to put your full effort into it just to be considered. It’s important to know someone is striving to do better and to make something happen for them. It’s great to know there are students at CCHS with these strong characteristics. The competition for the award is always strong so I’m sure it’s always a tough choice for the faculty.

“Rebekah is very well rounded and it speaks volumes about the type of person she is and the effort she puts into things she does.”

Faulkner and the CCHS Class of 2014 will participate in commencement exercises May 23 at Fred Schwartz Field.