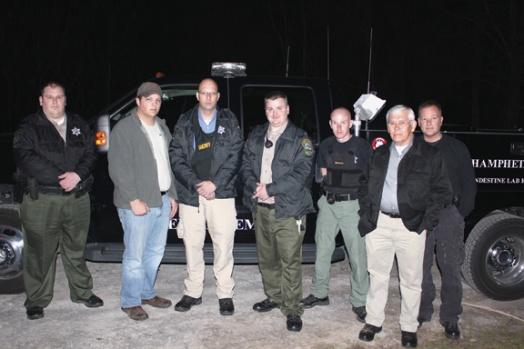 Charged were Bryan Lee Looper, Lucas Lee Dobson and Macy Broom. They face initiation to manufacture methamphetamine, maintaining a dwelling and possession of drug paraphernalia charges. A preliminary hearing is set for May 7 in General Sessions Court.

Gullett knocked on the front door to the house and "I then heard loud sounds coming from inside." The officers were met by Looper.

"I then advised Bryan that I had information that he was manufacturing meth-amphetamine at his resid-ence," Gullett said. "I then observed Bryan's eyes get very large."

The officers then asked Looper if they could search his home, but he would not sign the necessary form.

Sheriff Young along with Deputies Jordan McGee and Seth Perry and Reserve Officer Roger Young secured the house while Gullet and Young obtained a search warrant.

Once the search began, Gullet discovered a one-pot meth lab sitting on the kitchen counter. Three more meth labs were found in the kitchen area.

One-pot meth is made usually in soft drink bottles. Using this method meth cookers can produce hundreds of dollars worth of the illegal drug in less than an hour in their home, backyards or even a car.

More than 90 percent of the meth arrests across the nation associated with manufacturing are now using the extremely portable “Shake & Bake”or “One-Pot” synthesis method instead of high-production labs like the one of the popular cable TV series, “Breaking Bad.” This method of making meth are dangerous using ingrediates including lithium from batteries, drain cleaner, cold backs and camping fuel that are mixed together to make meth.

While Gullet and Investigator Young were searching the kitchen, Sheriff Young discovered a black bag on the back deck of the home, containing several more one-pot meth labs and materials used to make meth.

The Tennessee Methamphetamine Task Force was called and all the drug-related materials discovered both inside and outside the house were destroyed.