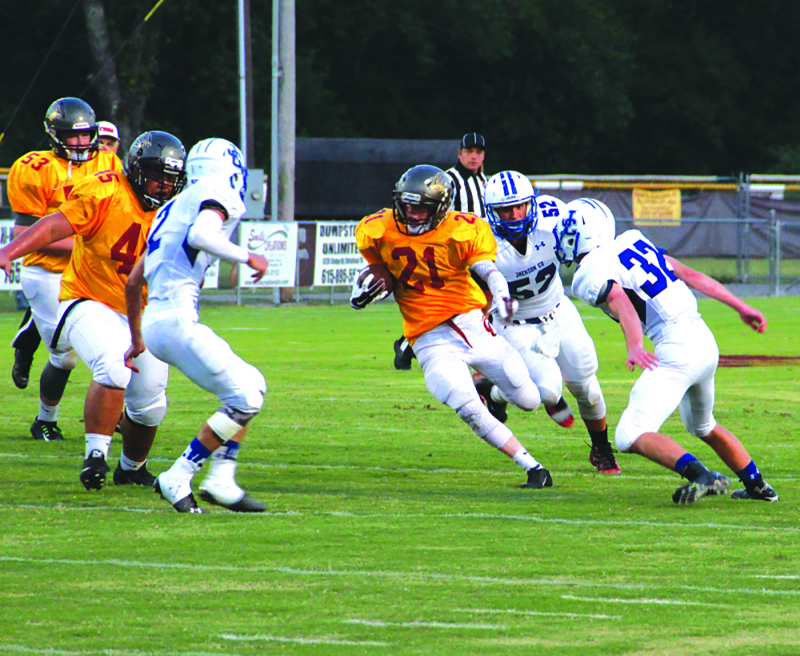 Cannon County's basketball teams celebrated a historical 2014-15 one last time with the annual postseason banquet inside Robert A. Harris Gymnasium on March 28. It was a chance for the players, coaches, and parents a chance to reflect on the magical season by both the boys and girls team
Of course, we all remember the Lionettes starting the postseason on Feb. 13 as a No. 5 seed in District 8AA, while the boys were in the middle of a long winning streak since New Year Eve's 2014. For both squads, it a special journey through the postseason, which included long road trips, two snowstorms, and several schedule changes. However, through it all, both teams will be remembered for its success for a long time as the Lionettes advanced to its third state tournament in four years, while the Lions was one game away from earning a trip to the Murphy Center for the first time in 30 years.
"It is really important to me because everyone doubted us as far as we got," Lionette senior Erin McReynolds said. "It just means that 10 times more special, because we were not supposed to make it as far as we actually did. It made our team closer because we really had to dig down."
"It is very special," Lions senior Jacob Nave said. "We did accomplish a lot this year. We won the most wins in Cannon County history and won the region. I am really happy about it."
The night was not about what could have been, especially for the Lions after coming so close to tasting history and ending a 30-year curse, or the Lionettes trying to win another state title with the first and only coming back in 1989. Instead, it was a chance for everyone to come together, especially those who played such an important role in the success of the team this season.


Magical run ends for CC girls
The magical run though the postseason ended at the 2015 TSSAA State Tournament for the Cannon County girls' basketball team. Its season concluded with a 69-48 loss to Martin Luther King during the Class AA quarterfinals. The Lionettes finished the season with a 24-10 record and Region 4 champions.
Coming into the tournament, CCHS had been on a magical ride through the postseason after a less than stellar regular season, in which they earned the No. 5 seed in District 8. During the next two weeks, the Lionettes defeated the top four seeds ahead of them to win the Region title. They could have won the district also, but the title game was cancelled because of the ice storm a few days ago.
However, their Region title earned them a home sectional game against Sequoyah on March 1 at the Robert A. Harris Gym in front of a standing room only crowd, which the game sold out in 15 minutes. At stake was a third consecutive appearance, and fourth in five years to the Elite Eight in Murfreesboro.
The Lionettes knew they had to fight with everything they had in order to reach their goal, but by now they were already used to it since hardly anybody gave them a shot before the postseason started to make it back to the Glass House inside the Murphy Center.
CCHS had five players in double figures to help them return to the state tournament. Kristen Hale led the way with 14, Autumn King had 13, McReynolds and Davis each had 12, and Kendra Maynard chipped in with 11.
With the win, CCHS was heading back to its 14th state tournament, and fourth in the past five years. Of course, it was hoping for its first state title since 1989.
The Lionettes quarterfinal opponent was Martin Luther King, based out of the Music City. This was the first ever meeting between the schools, and the Lady Royals were hoping of make some history of their own.
MLK qualified for the state tournament for the first time ever last season, but it was eliminated in the quarterfinals. However, they were coming off a huge upset victory over No. 2 ranked and once-beaten CPA in their sectional game.
Early in the opening quarter, CCHS hung in with MLK and the score was tied at 10 after a layup by Hale with 1:28 left. However, the Lady Royals took the lead for good when six foot senior guard Jordan Majors blocked a Lionettes shot, and fellow senior guard Briana Smith converted a three-point play with :53 seconds left in the first quarter to put them ahead 13-10.
That would be the closest CCHS would get during the rest of the game.
"I am proud of these kids, no matter what happened tonight," Dodgen said after the loss. "Obviously, you come here wanting to win it, and you want to do everything you can to win it. Sometimes it just does not happen. You cannot lose three starters, and three of our leading scorers when you are trying to make a run to cut it to seven. I am proud of our kids' effort, and I thought they played hard. They gave it everything they had, and that is all you can ask for.
Senior Kendra Maynard led CCHS in scoring with 15 points, while McReynolds added 11 in a losing effort. MLK got 22 from Smith and 21 from Majors in the win.


Hannah Whited wins acclaim
Most of the attention this school year on the CCHS athletic field belonged to a well-rounded, very talented senior class, including the McReynolds, Josh Ruehlen
hampionship.
"Last year, I learned from my mistake, because I took more time off," CCHS sophomore Hannah Whited said. "This year I went straight from cross-country to track, and I felt like that helped me a lot, because my body stayed in shape more.
The sophomore continued her success on the paths and track this season even though she had to do it for two different schools. Last season, Whited qualified for the cross-country state meet as a freshman, but she was the only member of the Lionettes to achieve this feat.
This season, her success continued as she was the top finisher for CCHS at all of the cross-country meets, which included two overall wins. At the same time, Whited was a member of the Lionettes which made history as the first team in school history to advance to the state meet as a team. During the state meet, Whited finished 11th, and the Lionettes as a whole completed the season with a 6th place placing overall.
"(Hannah) Whited is a very tough blue-collar runner," CCHS Cross-Country head coach Marc Larson said. "She always shows up and gets the job done. I never had to worry about her performance. Her consistency was due to her work ethic. Her attitude matches her ability. She is extremely supportive of the other runners. With all of her success, she stays grounded and loved by everyone on the team."

Dream comes true for Jonathan Odom
CCHS's Jonathan Odom experienced a litteral "dream come true" when he was hired as Cannon County's new girls basketball coach.
Odom takes over the successful program after previous head coach Michael Dodgen left to take the same position at White County. Odom had spent the previous seven seasons as an assistant for the CCHS boys' basketball team.
"The biggest dream anyone could have is to be a head coach and I am no different," Odom said on June 11. "I feel very blessed to have my first opportunity with a program like CCHS that has so much history and tradition. To be able to do it in my hometown and that just adds to it. I think that it is a big plus and just the knowledge of the fan base here and how passionate they are and knowing the history and tradition and the expectations is invaluable."
During Dodgen's decade at CCHS, he helped lead the Lionettes to four state tournament appearances in five seasons including last season's surprising run to the Elite Eight after finishing fifth in the district during the regular season. Odom understands the player's mindset of wanting to continue the program's winning expectations.
"They are so used to winning and they do not know anything different," Odom said. "That is a credit to Dodgen and the previous staff. That is so huge, because a lot of times when a coach take over a program they've got to 'change the culture.'
"The culture is already here. That makes my job easier in one way, but also challenging to have that pressure to keep that going. The girls are very driven, and they do not expect to take a step back. I am not going to put any guarantees that we are going to make it back to state, or how many games we are going to win. The girls expect that and I expect that," he said.
Jonathan Odom