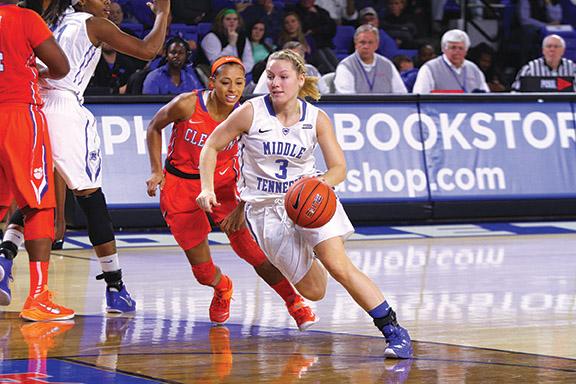 2014 was a great year in sports for Cannon County with numerous team and individual achievements. Here is a look back at the top sports stories in 2014.

1.
What a year it was for Cannon County girls basketball player Abbey Sissom. The senior guard put together one of the best all-around careers in program history and she was justly rewarded at the end of her career. Sissom became just the second Cannon County athlete to sign a Division I scholarship when she inked with Middle Tennessee. She joined girls basketball player Julie Powell, who signed with Vanderbilt in 1990, as the only other Cannon County athlete to sign a scholarship with a Division I school.
Not only did Sissom earn a Division I scholarship for her outstanding play, but she also was named Class AA Miss Basketball. Sissom joined Powell as the only player in Cannon County history to win the prestigious honor. The sharp-shooting guard also was named District 8-AA Player of the Year for the second straight year. She was also named to USA Today's All-Tennessee team. Sissom closed her career with 2,606 points which is second all-time at CCHS.

2.
The Cannon County girls basketball team earned their third trip to the TSSAA Class AA state tournament in four years in 2014. The Lionettes put together a strong run that featured the District 8-AA championship and after falling to Livingston Academy in the Region 4-AA championship they went on the road to capture their second-straight Sub-State road win and punch their ticket into the state tournament.

4.
Cannon County's Marshall McReynolds and Jake Burdick advanced to the TSSAA Class A/AA Tournament in 2014. McReynolds made his second straight trip and finished 14th out of 191 runners. Burdick, a senior, advanced to the state tournament for the first time.

6.
Abbey Sissom and Marshall McReynolds were named The Cannon Courier's Female and Male Athletes of the Year, respectively, during the annual Cannon Courier Hall of Fame and All-Sports Banquet. Umar Rasul and Rebekah Faulkner earned the President's Cups for top scholar/athletes; and Jeffrey Northcutt and Macy Clements were named the Lions Award Winners.

8.
Former Lionette standout Emily Sissom was named to the WBCA Good Works Team and one of just two Tennessee college players to make the list. Sissom, who holds the state record for career 3-pointers, is a senior at Union University.

9. Spencer Chatwood, an 8-year-old who attends West Side, vaulted onto the Motocross scene in 2014. Chatwood won the championship in the Big Show Series and finished second overall in the Southern All-Stars.

10. The Junior Lion football team earned an invitation to a bowl and defeated Carroll-Oakland of Lebanon, 34-0, to cap their sensational season.