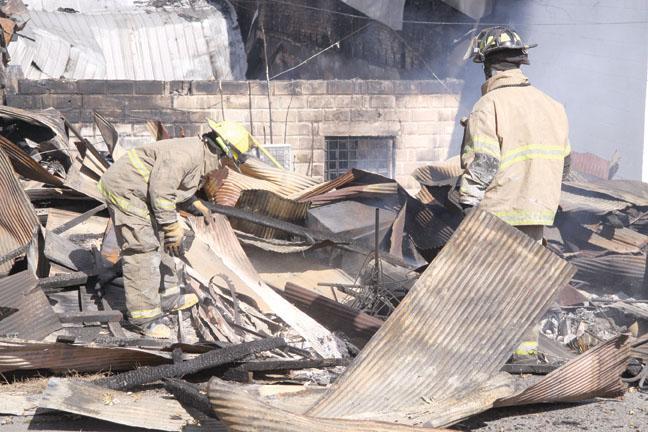 The Nov. 1 fire threatened the entire southside of Woodbury's Square.

The year 2013 had its share of major stories ranging from a fire that threatened to destroy the southside of the Square to debate over plans for state Route 70S.

The Nov. 1st fire on the Square was the biggest story of the year.

The blaze sent flames roaring nearly a hundred feet in the air, but the combined efforts of the Woodbury Fire Department and units from Rutherford County and Manchester brought the fire under control saving most of the shops on that side of the Square. Only two stores, Hope and Faith and Off The Hanger consignment stores, and a warehouse were destroyed.

Tangles beauty salon and the Bean Patch suffered smoke and water damage, but both quickly recovered and got back in business for the Christmas shopping season.

Fire trucks from Manchester and Rutherford County were able to reach out over the buildings and pour thousands of gallons of water on the blaze, extinguishing it. Woodbury's Fire Department didn't have an engine with that capability.

Since the date of the fire, Monster Broadband, a Winchester-based internet company, has donated a 1977 ladder truck to the Cannon County Fire Department. The truck, which features a 100-foot ladder, will be able to tower over any building in town.

Following the fire, Woodbury Mayor Harold Patrick said he didn't want to belittle the losses, but added that it could have been much worse.

"The ladder trucks are what saved us. Without them, the whole Square might have gone up," the Mayor said.
"All we could do was go to the front of the buildings and spray water through the front," Patrick said.

"But thank goodness, Rutherford County and Manchester came to our aid and were able to knock the fire down with their ladder trucks," he continued.

The fire was Woodbury's second major fire like this in recent years, Patrick said. J.P's Fine Swine Barbecue was destroyed in an inferno on Jan. 21, 2011.

Meanwhile, the store fronts that housed Hope and Faith and Off the Hanger remained boarded up on Main Street (state Route 70S).

Speaking of Main Street, debate on completion of the 70S project from McMinnville is beginning to intensify.
Woodbury and Cannon County officials are expected to hold a joint meeting later this month to discuss options on the highway. The Tennessee Department of Transportation has proposed several plans to complete the highway as a bypass around Woodbury.

However, public opinion seems to be favoring leaving the road as is as a way of preserving business in downtown Woodbury.

Changes in Cannon County government could have some impact on plans for 70S.

Those changes began with the resignation of Commissioner Kevin Mooneyham, who moved out of his district. Mooneyham, Woodbury Police Chief, was replaced by businessman Jim Jones.

After several weeks, Chuck Holt was selected by the Commission to replace Stoetzel.

Both Holt and Jones quickly emerged as opponents of plans to route Highway 70S around Woodbury.

Commissioner Chuck Holt, who represents Woodbury on the Commission, said a number of residents are worried about the roadway's path during the December Commission meeting.

"Once we do a bypass around Woodbury … it's going to kill Woodbury," Holt said.

Holt said he has done considerable research about the proposal.

"I've looked at Sparta and McMinnville" as well as other communities like Alexandria, he said. "I just don't see what the possible benefits are to our community."

Many local businesses are struggling to keep going. They can't afford to move. They are doing good to keep their heads above water, Holt said.

The project benefits McMinnville and not Woodbury, he said.

Mrs. Adams volunteered at Stones River Hospital for many years and was a Charter Member and Lifetime Board member for the Arts Center of Cannon County and Library Board Member for the Adams Memorial Library and Charter Member of the Cannon County Historical Society. She performed in numerous plays at the Arts Center and helped to organize and direct others.

While the year was marked by the passing of these significant people, 2013 was also marked by historic efforts to save the lives of younger Cannon County residents.

Most notable was Franz Walkup's battle for life.

Sgt. Walkup was serving in Afghanistan when was wounded multiple times in late September by "friendly fire" from Afghan soldiers. Since then Walkup has undergone multiple surgeries. He is now recovering from his latest operation at home with his wife, Shannon.

Walkup was honored with a homecoming parade on May 19.

Lexi Browning, age 9, was saved with a heart transplant last February at Vanderbilt Hospital. Lexi is the daughter of Jack and Michelle Browning.

2013 was also marked by a renewed push in tourism in Cannon County. The Chamber of Commerce, aided by a new hotel/motel tax, promoted a year's full of events ranging from major car shows on the Square to a push for visitors at the Short Mountain Distillery.

Speaking of the distillery, Woodbury residents can now legally buy Short Mountain's "shine" at the town's first two liquor stores, Bootleggers Liquors and O'Grady's Wine and Liquors, both opened during 2013.

The liquor referendum easily passed during a city election and both stores opened with little community resistance with West High Street Church of Christ's attempt to block O'Grady's due to a distance requirement failing.

Bad weather did have an impact on Cannon County during 2013. Flooding blocked some roads and threatened homes, but it went from 75 degrees to snow on the ground with a tornado mixed in on Jan. 30.

High winds ripped through Cannon County uprooting a number of trees and damaging some structures.

The heaviest damage was on Roach Hollow Road with two barns damaged along with some homes. Trees were downed on East High Street and Riverview Drive off Murfreesboro Road.

The twisting wind destroyed trees on Auburntown Road as well and on Old Murfreesboro Road near Readyville. A 100-plus year old cedar tree near New Hope Church of Christ was twisted apart. No injuries were reported during the storm.

"Storms" raging over the Cannon County Election Commission finally blew out with former Election Coordinator Stan Dobson dropping his lawsuit against the panel. Dobson had been voted out by the Election Commission. His suit said his dismissal had violated Tennessee's Opening Meetings law. Dobson was replaced by Dorinda Mankin who still holds the post.

After considerable debate by the County Commission and Cannon County Board of Education, a full-time SRO (School Resource Officer) was established at Cannon County High School. Travis Turney is holding the post which provides security at the high school.

The debate was triggered by the Newtown, Conn. incident in which 26 persons were shot to death. School Board member Bruce Daniel, County Commissioner Kevin George and Sheriff Darrell Young led the push to add the resource officers.