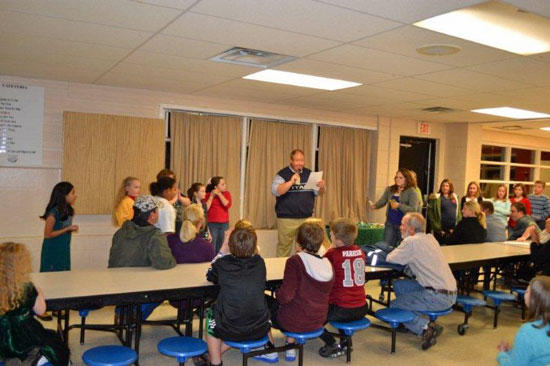 Who looks forward to speaking before an audience or traveling on a rainy night? Not most folks. But, that was the dedication shown when 4-Hers met at West Side School for the 2011 County 4-H Public Speaking Contest held December 6. Additionally, the kids brought with them support of nearly 100 family members and friends.

Before the speech contest began, Extension Agent Heath Nokes reviewed rules with the judges. Appearance, use of language, preparedness, projection to audience, subject matter, and composition were rated during speeches. Different age groups had specific time limits to present ideas and information.

4-Hers at the event appeared to know their topics either through research or personal experience.

For example, one child spoke on hunter safety and through his presentation; his audience knew he could properly shoot a gun.

A girl, whose brother is autistic, spoke on how autism impacts the family. Heroes, chickens, anthropology, animal agriculture, marine biology, and self-defense are just a few of the additional topics selected by the 31 speech contestants.

The 4-H speech contest provided youth the opportunity to increase self-confidence while speaking. If good communication skills are important, and we know that’s true, practice is the best way to learn. Regardless of age, everyone needs to communicate ideas clearly.

Congratulations to all the 4-Hers who were winners just for participating in the 2011 speech contest!