‘World’ Of Support For Dog Shot In Mouth 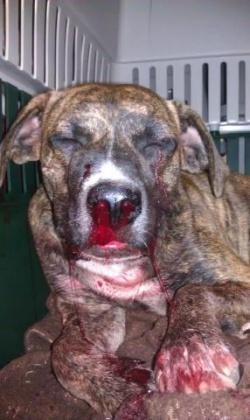 An outpouring of concern and support from all over the world is overwhelming the Cannon County Animal Clinic as it cares for a dog which was shot in the mouth earlier this week.

The female boxer mix was taken to the clinic by the Warren County Humane Society.

“The injured dog was brought to us Wednesday night,” Dr. Gayle Tate said. “At first we didn’t know what caused the injuries.”

Dr. Tate said when he began his examination of the dog he found that it appeared someone had put the barrel of a gun in the dog’s mouth and fired.

Corona was found bleeding in the road by a group of children on Wednesday night, according to reports. At first, it was believed that she had been beaten since she was bleeding from her mouth, nose and eyes.

The veterinarian said the dog’s tongue was split, and there was a large laceration from the tongue to the larynx. She also had several facial fractures and tissue damage.

The good news according to Dr. Tate is that the injuries are not life-threatening.

“She is doing well,” Dr. Tate said. “She is starting to recover and the prognosis is good.”

The ordeal has been an emotional one for the staff of the animal clinic.

“It made us cry when we realized what her injuries were and how there were caused,” Dr. Tate said. “But the outpouring of support from all over the world has been amazing to us. We’ve received calls and messages from places as far away as Australia.

According to the Warren County Humane Society’s Facebook page, the dog’s name is Corona. A person associated with the group posted the following message earlier today:

“My husband and I went to bed around 4 a.m. doing our best to catch up with everyone as we are overwhelmed with all the well wishes and love and concern for our sweet Corona, we just got off the phone with Dr. Tate and Corona has eaten a little bit this morning and is doing OK and is stable and we are just thrilled beyond words and we will be going to visit with Corona and love on her here in a little while.

Dr. Tate said all donations his office is receiving will go toward the care of the dog and the Warren County Humane Society.

Anyone who wants to donate toward Corona's medical bills can give to the Cannon County Animal Clinic by calling them at (615) 563-4022. You can also give through the Warren County Humane Society at www.hswarrenco.org or through PayPal by sending to hswarrenco@hotmail.com. Donations can also be mailed to:

Print
Members Opinions:
[Delete]
Does anyone know who or why this was done to this poor dog? There should be lots and lots of charges against whoever did this to Corona. How did they find who her owner was?

mkastor
[Delete]
The person responsible for this should be found and charged to the max...I am sure this will not be their stopping point!!!
honeymooner1978
[Delete]
Dr. Tate also had a mobile vet unit come to repair my Doberman in February who was shot on Carole Anne Drive in the Woodland Area. The vet clinic of Dr. Tate cared for my doberman for two months after putting a plate and pins and screws in. If you look onlin on the Cannon Courier, Kevin put all the articles on about him being shot! No one has owned up to it and we have not found out who did it...a month after the surgery Dr. Tate had to amputate his leg. He is now doing wonderful, runs and plays and altogether with all the veterinary expenses and Emergency ER room for two months, it was $3000.00 total for everything and Dr. Tate really gave us a BIG discount to help out. It will NEVER be forgotten what Dr. Tate and the Clinic in Woodbury did. He even called from Alaska when he was there to do Veterinary work to check on my Doberman. This family needs help with the vet bills and most of all it needs to be found out WHO is shooting dogs like this and harming them. If someone can be this cruel to an animal, next it might be a child...Please if you know ANYTHING about the shootings out in the Woodland Area of several pets including mine or any information regarding any shootings of animals, please report it......we never know once again if their next target is a child or adult!
redbird
[Delete]
Dr. Tate is amazing, he came to our house on A Sunday Morning at 7:30 to take care of Jacob our Great Pyreneese. He has taken care of our pets for 30 years. We really appreciat him so much. When I read about Corona it made me so angry. How can anyone be so evil. If this person did this to a helpless animal no telling what he will do next. I am so happy the Doberman, is doing so well, I was wondering about that. I hope who ever harmed these poor dogs, will get what is due them soon.
ftenpenny
[Delete]
People that mistreat animals will mistreat children,As for charges,a cow whip would adjust this low lifes attitude.
mvance
[Delete]
My son has a Jack Russell terrier who had cancer in her mouth. Dr. Tate removed the cancer several times, but it came back. The mobile vet unit and Gayle removed her lower jaw and she is now cancer free. Gayle has taken care of all our animals for over 30 years and does and excellent job. We appreciate him greatly. He has great kids too, because I taught them in school.
ewimbush
[Delete]
This sounds like teenagers with a lot of anger who think it is funny to shoot an animal. They are probably trolling the neighborhoods just for kicks. They need to be stopped and placed in a cell for about 10 years for each animal they harm. This will give them enough time to think about their cruelty. Next it could be a person.
junebug18
[Delete]
Glad to hear this beautiful animal will survive and be loved. As for the person or persons who commited this horrific act, it worries me. What kind of mentality does it take to do this to a living creature?? So sad. I hope who ever is responsible is caught quickly.