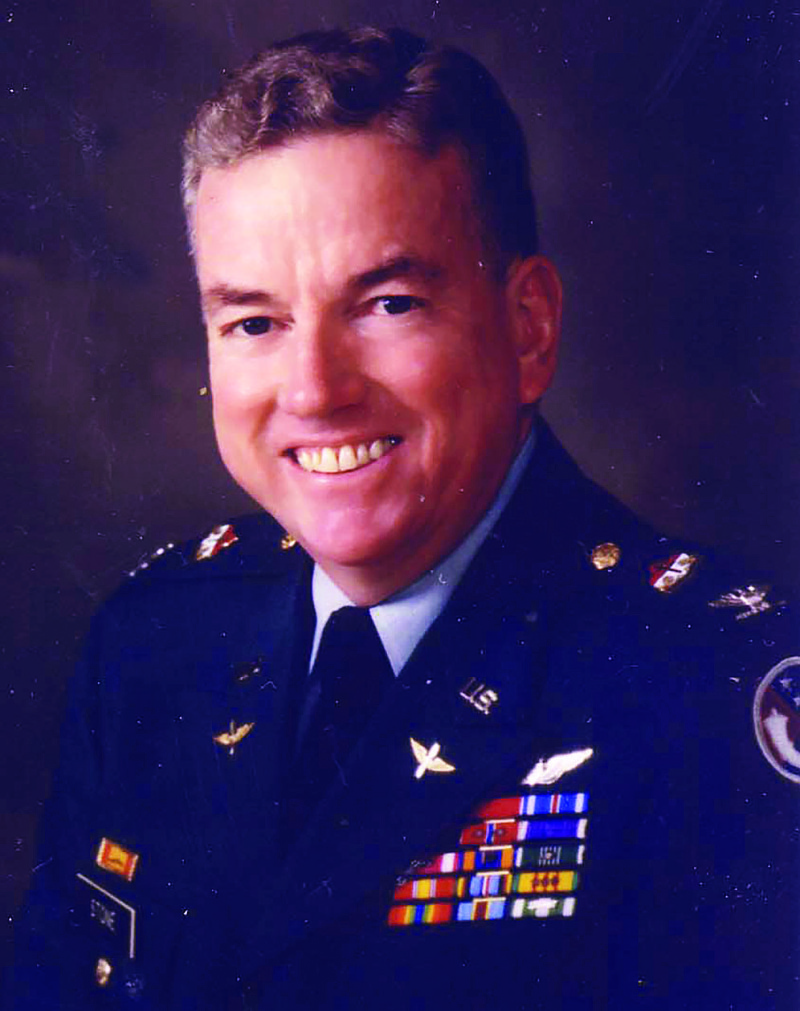 The Stones have been solid rocks of history in Cannon County beginning in the 1700s with "Long Hunter" Uriah Stone, namesake of the Stone's River that spawned Cannon County, Woodbury, Readyville and other communities downstream.

Descendant James "Jim" Stone has kept the family flow of significant modern history flowing, starting with: "I woke up alive! ... I could have woke up dead!"

Retired Army Colonel Stone, shared his thoughts when coming out of a coma in 1963, three days after the Viet Cong had blasted his UH-1B helicopter out of the sky.

"I woke up three days later in a Saigon tent hospital, and recall thinking: 'I woke up alive ... I could have woke up dead,' I remember being excited, actually very thankful, as my hands examined my upper torso to see if all was still where it was supposed to be."

He woke up with a parched throat.

"When this nurse walked by, I smelled water," Col. Stone added. "I didn't know how long I'd been unconscious, but it's the first time I remember literally smelling water. I couldn't wait to drink some water."

Col. Stone, who served 35 years in the military following in the tradition of his deceased father career Army M/Sgt. Hilton Stone, described why he had flown his helicopter into enemy fire.

"We were there to rescue wounded friendlies, after two of our H-21C flight crews had been wounded," accounted Col. Stone. "I probably survived because our helicopter was only 15 feet above the rice paddy when the Viet Cong pierced our chopper with 17 bullets. The (2-feet in depth) water also softened our crash."

A wounded American pilot he was attempting to rescue ended up saving Col. Stone's life.

"He saved me by holding my (unconscious) head up out of the rice paddy water," Col. Stone confirmed. "I've never found out the pilot's name who kept me from drowning."

Col. Stone was fortunate, but his crew chief perished in the assault and crash.

Pentagon records confirm why Col. Stone was presented the "Distinguished Flying Cross" -- "For heroism while participating in aerial flight. Lt. Stone without regard to personal safety and knowing full well the grave dangers involved, initiated an approach into the landing zone to attempt the rescue of the (two) downed CH-21 (chopper) crews. The Viet Cong fire was intensive throughout the approach.

"The Viet Cong fire resulted in the death of the crew chief (on Col. Stone's UH-1B aircraft) and the subsequent crash of the helicopter. Lt. Stone was knocked unconscious in the crash. Lt. Stone's selfless act of attempted rescue in the face of blistering Viet Cong fire was an act of extreme heroism."

He's the honoree of three combat Bronze Stars, two Legions of Merit, two Meritorious Service Medals, 12 Air Medals in combat and two Army Commendation Awards for bravery in combat, and a member of the MTSU ROTC Hall of Fame.

The retired Master Army Aviator, who received a Purple Heart for his wounds, said he felt "destined" since boyhood to serve his country ... having lived briefly as a boy on Sewart Air Force Base in nearby Smyrna where his military career father had been stationed.

Col. Stone's mother, Ruth, was known as "Granny" by thousands of students at Woodbury schools where she worked as a dietitian for 20 years.

In 1959, Col. Stone married Frances Ray McBroom and enjoyed over 50 years of marriage until her death on February 9, 2011.

"I flew in the first 'hot mission' our Army launched in Vietnam," Col. Stone confirmed. "We gave the enemy a hard day, with all of our mounted machine guns and missiles on our helicopters."

He was a pioneer aviator in the Army's first turbo-jet helicopter, nicknamed the Huey, in preparing to serve in the first armed helicopter unit sent into combat in Vietnam. He was one of the original Iroquois Chieftains, a precision helicopter flying team of the 101st Airborne Division.

Preserving history and honoring military professionals, past and present, helps motivate Col. Stone, at age 79, to continue serving other veterans.

"If we don't record and preserve our history, what's to keep mankind from making the same mistakes made by previous generations," confirmed Col. Stone, a past "Commander" of Woodbury's American Legion Post 279 serving more than a hundred military veterans and families.

He also believes in strong civic duties as a civilian!

"We help support the annual summer Tennessee Fishing Rodeo when Wildlife officials stock 500 extra catfish in the stream beside Dillon Park," Col. Stone added. "Up to 50 children learn to fish that day."

"It does my heart good to see our youth show respect to our military heroes," Col. Stone added. "We try to say thanks to military veterans and families on the Fourth of July, on Veterans Day and on Memorial Day weekends."

He credits Cannon County citizens with being patriotic!

"Judging from the high turnout and participation at our celebrations and parades, we are a very patriotic community," Col. Stone responded. "We're proud of our brave men and women who serve in the nation's military."

Colonel "Jim" Stone could just as accurately be known as Cannon County's "Gem" Stone of history.