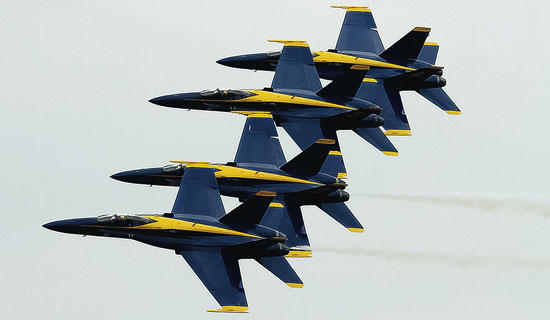 With barrel rolls, inverted back flips and his plane’s raw speed and power, the pilot nearly made an “underwear bomber” out of me, if you catch my drift.

We introduced ourselves at an altitude of about 3,500 feet, and air speed between 250 and 300 MPH amidst breath-taking swoops, loops and twirls.

“The well-preserved expanse of old Sewart Air Base, and modern-day Smyrna Airport management, yes, as industry people, we rate the Great Tennessee Air Show among the best, not only in America, but globally,” confirmed the colorful grandfather who has flown more than 280 types of aircraft in his storied test pilot, aerobatic demonstration career.

His nickname, “Corkey”, was taken from his first airplane (out of Japan) purchased for him by his stunt piloting father, the late great Bob Fornoff.

Corkey is known worldwide and locally.

Billed as aviation’s “James Bond 007” at the historic Smyrna Airport’s recent 2012 air show, I realized I was flying with a movie-making air show “legend” as we swooped and looped above Rutherford County’s Mt. Trashmore, Cannon County’s Short Mountain, Gassaway and Woodbury, plus the Stone’s River, Percy Priest Lake, and ultimately, over the construction site of Smyrna’s new Parkway Baptist Church on Nissan Parkway near Interstate 24.

As a member of the Screen Actors Guild in Hollywood, some of Sir Corkey’s most memorable aerial roles include James Bond’s 007’s “License to Kill,” “Moonraker” and “Octopussy,” the latter included the amazing scene where Corkey flew through a hangar sideways.

“They (movie producers) don’t pay me to be dangerous,” Corkey credits modestly. “They pay me (big bucks) to be safe!”

“I’ve been in more than 100 commercials and a member of the Motion Picture Pilots Association,” he said as we soared higher and higher.

How high did we get?

As we slipped the surly bonds of earth, I looked around in the puffy white clouds and thought I might have caught a glimpse of the late Steve Fitzhugh, last commandant of old Sewart Air Base when it closed in 1972. But I’m certain I viewed Steve’s angelic wife, sweet Ann, as we soared over their beloved old earthly Sewart Air Base of operations.