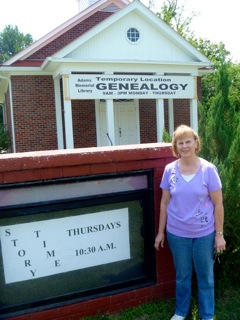 Peggy Tate, volunteer genealogist, in front of the temporary location of the Adams Memorial Library genealogy section.
Construction of a 3,000 square foot addition to Adams Memorial Library on College Street in Woodbury is progressing on schedule, according to Terry Preston of Preston Brothers Construction Co., the general contractor. The building is “in the dry” and various sub-contractors are installing electrical, HCVAC, etc.  Local workers and suppliers are being used wherever possible.

When this portion of the contract is completed the present library building will be emptied and a major renovation of that space will begin. The two buildings will become one and a new library facility, designed to meet present and future needs will be ready for occupancy around the first of the year.

Already the Genealogy section of the library has been moved to its temporary location in a former church building located next door to the Woodbury Postoffice. This space has been made available for library use by its owner, Neal Applebaum at no cost. The genealogy section be open to the public from 9 o’clock until 3 o’clock on Monday and Thursday each week, manned by volunteer genealogist Peggy Tate. The Children’s Story Hour for pre-school childfn will be held there at 10:30 each Thursday morning by Patty Chappell.

The public-use computers and other library facilities will be moved temporarily to the newly-renovated Community Room in the lower level of the library building while the construction is being completed. Library Director Rita Allen has promised library patrons to provide as many library services as possible in temporary locations during the construction.

The completed project will result in a newly-designed and enlarged library with 24 public-use computers, enlarged comfortable reading areas, and three specially-designed areas for children through teenagers.

Parking and entrance to the new library will  be on the west side of the building. A lighted, paved parking facility is in the plans with handicap parking near and on the same level as the entrance. The present library entrance will be used for emergency exit only.

The community meeting room on the lower level is being completely modernized and will be accessible from the new parking spaces.

Funding for the project will be entirely voluntary contributions. The Christy Houston Foundation of Rutherford County recently approved a grant amounting to $218,278 in memory of Frank K. Houston, a Cannon County native who had made substantial gifts to the Rutherford County Hospital many years ago. The Frank K. Houston Center for Learning will be a major section of the new library.

Contributions are still being actively sought by the fundraising committee headed by Peggy Tate and Charlie Harrell. Herb Alsup, building fund treasurer, reports that $120,000 is still needed to be able to have the project completely paid for when it is completed. The entire project will cost $1.25 million.

Any contribution is tax deductible and may be sent to Herb Alsup, 63 Maple Street, Woodbury, TN 37190. Checks should be made payable to Library Building Fund.