Zelenik And 'Joe the Plumber' To Campaign At Joe's Place Friday 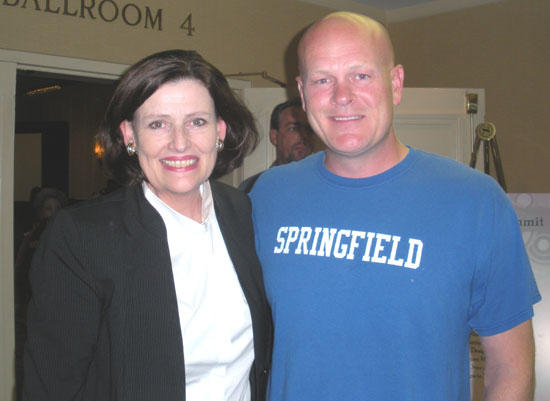 As a part of that, he is endorsing candidates who are strong fiscal conservatives, and defenders of traditional conservative values. Zelenik was also recently named "Conservative of the Year" by the National Fiscal Conservative PAC.

Lou Ann Zelenik and Joe the Plumber will be campaigning in Woodbury Friday, June 18 from 2 to 3 p.m. at Joe’s Place.

In his endorsement statement, "Joe" said, "I first met Lou Ann at a Tea Party in Tennessee, and right away I could tell she has a passion to “serve” her fellow man, you don’t find many people out there that remember and understand “your first duty as an elected public servant is to the people.

In addition to Joe the Plumbers’ endorsement of Lou Ann Zelenik, he will also be campaigning across the 6th district next week.

In accepting the endorsement Zelenik responded by saying, "Joe the Plumber has come to personify the American spirit of hard work, and individual responsibility. He recognized the socialist ideology of Barack Obama well before many others had caught on. His support of my campaign means a lot to me personally, and reflects the broad, mainstream conservative appeal that this campaign is having. I thank him from the bottom of my heart."

Lou Ann Zelenik is campaigning for the GOP nomination in Tennessee's 6th congressional district. It has been held by 13 term Democrat Congressman Bart Gordon who announced his retirement late last year. Zelenik is a Murfreesboro businesswoman, former Chair of the Rutherford County GOP, and a leader in the Middle Tennessee Tea Party movement. She announce her candidacy last fall, and Gordon announced his retirement shortly afterwards.

For more information regarding Lou Ann Zelenik’s Campaign tour with Joe the Plumber can call (615) 962-7716.

Print
Members Opinions:
[Delete]
A guy who didn't pay taxes and lived on the dole while criticizing government assistance to other people wants to hold politicians accountable.
And Zelenik says "Joe the Plumber has come to personify the American spirit of hard work, and individual responsibility."

bullpen
[Delete]
Hey SmilinJack, He did pay his taxes, unlike Oberheme's people, and he did hold a valid job, unlike Oberheme himself. Also the Dem that investigated his taxes did so illegally and was releaved of her job. Or as so many others who help Oberheme they are reassigned.
[Delete]
Joe paid his taxes and hospital bill with that money for shilling McCain--good Republican:
"There is a judgment lien against him for nonpayment of income tax," Barb Losie, deputy clerk of the Lucas County Court of Common Pleas, told ABCNews.com. "The state files hundreds of liens a day. It means he owes that money."

Losie said Wurzelbacher owes $1,182 from January 2007, but no action has been taken against him outside of filing the lien.

A second lien has been filed in the courhouse against Wurzelbacher for $1,261 that he apparently owes St. Charles Mercy Hospital. That lien was filed in March 2007.

bullpen
[Delete]
SJ, I am glad that you believe that not paying your taxes is a crime. So tell me, what is your opinion of our President's Cabinet Appointments such as,Tom Daschle D-S.D, Tim Geithner, Kathleen Sebelius, Ron Kirk, Nancy Killefer...

Or how about his Safe School Czar, Kevin Jennings, who promotes statutory rape between a boy and a man. Don't believe me look it up.

Or how about Van Jones as White House Council on Environmental Quality's Special Advisor for Green Jobs, a Communist. Not my words but what he calls himself. Do we really need a communist advising our President?

The Constitution was outdated the date it went into effect. Without the Amendments it is an extremely racist and biased document!

No particular party has the corner on morality--Sanford in SC, the Senator solicting in the men's airport restroom, Newt, a paragon of virtue or McCain activities while his first wife lay recovering from injuries--but when a Republican calls Joe the Plumber a personification of hard work and individual responsibility --someone out there riding the coats tails of others, making money shilling--one can not but laugh at how stupid the tea baggers have become!
JohnnyRingo
[Delete]
I wouldn't be carting Plumber Joe around as an example of what Americans should aspire to be.