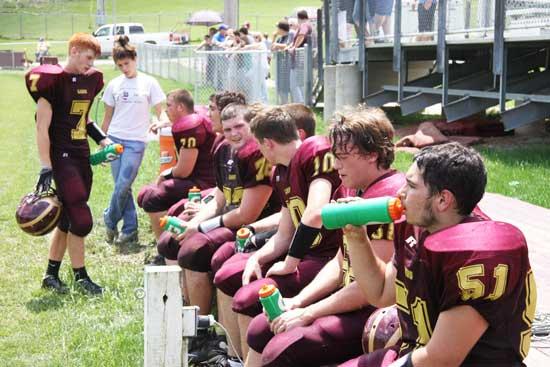 Lion players get refueled during Saturday's scimmage.
After losing 12 seniors from its District 9-AA championship squad in 2009, Cannon County’s football team will feature several new faces in key positions for the 2010 campaign.

If the 2010 spring practices and Saturday’s scrimmage against Sequatchie County to close out the spring are an indication then it appears only the names have changed – the same championship mentality still exists.

“We lost a lot of good talent, real good talent, but we are going to be OK,” Cannon County coach Joel Schrenk said. “We are a million miles ahead of where we were last spring, and I saw progress throughout this offseason. A lot of guys have stepped up and that’s what we needed to happen.”

One such player is sophomore Brandon James, who won the starting quarterback job coming out of spring drills. But James is just one of several young players who have caught Schrenk’s attention throughout the spring.

Sophomores Zach Osborne and Ryan McLaurine have solidified starting jobs on the offensive line. Justin Tobin and newcomer Collin Jones also have made a splash.

The most glaring questions facing Cannon County entering spring practices were which young players would step up? Would the Lions continue to be physical and compete? Who would earn the starting quarterback position?

All were answered during the two-week process that culminated with an impressive, physical scrimmage against Sequatchie County Saturday.

“Brandon James has stepped up and won the quarterback job and Heath Simons is the No. 2 quarterback and he is very capable so we have two solid quarterbacks,” Schrenk said. “I think the offensive line is going to be strength for us and I was a little worried about that. These kids have always been physical, more than anywhere I’ve been. They love being physical. I think we answered all the questions we had going into this spring.”

James demonstrated how and why he earned the starting nod at quarterback exiting spring drills during Saturday’s scrimmage. He had a 35-yard touchdown pass to Damon Collette and another to Simons. Cannon County also scored three of five times inside the 10 and Simons also led a scoring drive.

“At the beginning of spring drills coach (Schrenk) told me I had to step up and make a run at the job,” said James, who played on Cannon County’s 2009 championship team as a freshman. “I felt like I had a good spring but there is still a lot of work ahead. We had a great spring as a team and we have a lot to build on going into the summer.”

Two of Saturday’s scores featured goal-line collisions in which Collette willed his way into the end zone by bullying over the defenders blocking his path.

Cannon County’s defense allowed just one touchdown during the 10-play portion of the scrimmage and otherwise had a strong performance forcing numerous turnovers and collecting three.

“We take pride in winning battles and being a physical team,” linebacker Gabriel Walkup said. “We had a real strong spring. We improved and were able to accomplish the things we set out to accomplish.”

Simons, one of the veterans who will be counted on for leadership, said the tone was set during the spring and the new attitude Cannon County has is evidenced in increased numbers and improved play on the field.

“We had to find a lot of people to step up during these spring practices and we did,” Simons said. “We found out what we needed to and we know what we have to do heading into the summer. I believe our defense is going to be pretty good. It’s a physical bunch that likes to hit and that is to our advantage. We lost 12 really good seniors but we have a good group coming back and that showed this spring.”

(Tony Stinnett is co-editor of The Cannon Courier. He can be reached at stinnett@cannoncourier.com)