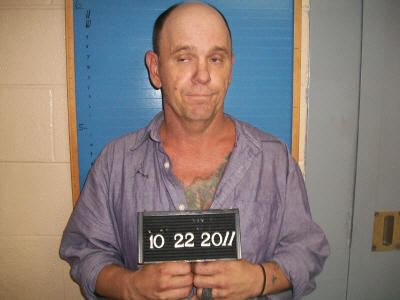 A Smithville man who was wanted in Cannon County for Failure to Appear was arrested Thursday after Sheriff Darrell Young saw him riding in the rear seat of a vehicle.

Sheriff Young informed Sgt. Neal and Deputy Moss that the vehicle was traveling West toward their location and that it was occupied by two white males and one white female. The officers stopped the vehicle at the intersection of Poplar Bluff Road West and Highway 96.

Eisenmann was in the back seat of the vehicle and he was taken into custody. Eisenmann allegedly had in his possession approximately .25 grams of a powdery substance in a clear plastic bag, needles and an EBT card which did not belong to him.

Eisenmann stated the powdery substance was methamphetamine and that it belonged to him.

The driver of the vehicle, Randy Caldwell, was driving on a suspended license and a warrant’s check revealed he was wanted in DeKalb County.

Nicole Madden was the front seat passenger and owner of the vehicle. She was issued a release citation for allowing Caldwell to drive her vehicle while his license was suspended.

Eisenmann and Caldwell were transported to the Cannon County Sheriff’s Department. Eisenmann was served the Capias warrant and was also charged with Simple Possession of Schedule II (methamphetamine), Possession of Drug Paraphernalia and Illegal Possession or Fraudulent Use of a Credit or Debit Card.

Eisenmann’s bond was set at $97,000 and he was turned over to Booking.

Caldwell was issued a release citation for Driving on a Suspended License and the DeKalb County Sheriff’s Department was notified.

It was Eisenmann’s second arrest in a week. He was charged with three counts of forgery on Oct. 22 by Woodbury Assistant Police Chief Kevin Mooneyham. Eisenmann allegedly stole checks from the victim’s residence, signed the victim’s name to them, and cashed them at Regions Bank. The amount of the three checks cashed total over $1,000.