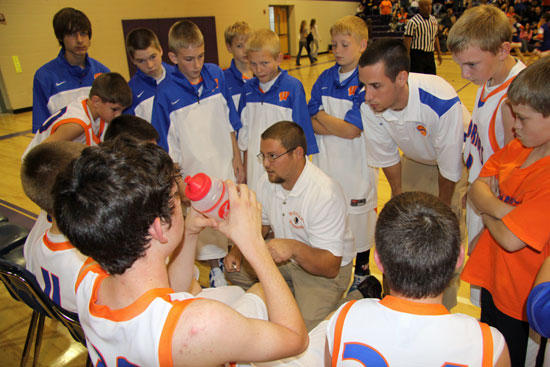 Woodland coach Kendall Smith discusses strategy during a timeout in the finals of the 2011 WGS Border War Tournament Saturday (Oct. 29).

West Side boys basketball coach Roger Haley thought Woodland would be the county's top team in 2011-12 and the Warriors did nothing to change his mind after the two collided in the finals of the WGS Border War Tournament last week.

Playing without starter John Mark Turney and not delivering its best game of the week, Woodland still secured a 36-22 win and the tournament championship at Woodbury Grammar School.

Although Haley still believes Woodland is the team to beat, he came out of the week with a different outlook for his team following a 2-1 showing.

"Coming into the season I thought Woodland was a lot stronger than any other team in the county, and I still think that," Haley said, adding, "but if (West Side) plays like they played today then we might be able to play with them. I have a little different outlook on the season now. We had some bright moments and things to work with."

Woodland's size and strength was too much for not only West Side, but also the entire tournament field. The Warriors went 3-0 and used their inside muscle to win the title. Austin Martin led Woodland with 19 points and five rebounds in the championship, and Bo Bryson added 14 points and five rebounds. The duo dominated the paint and key the title run throughout the week.

"It felt good to win the tournament," said Martin, who averaged 17 points in the three wins. "I don't think we played as well against (West Side) as we did the first two games, but we battled and played hard and won."

"It was a good week for us because we were able to get game experience and we played some good competition," Woodland coach Kendall Smith said. "We can keep building. We were out of control offensively."

West Side provided a good challenge in the title game and led 9-8 after the first quarter. Woodland came alive in the second quarter, holding an 11-6 edge and taking a 19-15 lead into the half.

The Eagles (2-1) led 20-19 late in the third quarter when Smith called a timeout to challenge his squad.

"I told them we were a lot better than we were playing," Smith said. "I told them we could keep playing like we were and lose or we could pick it up and get the win. They came out and battled and we got the win."

The Warriors certainly heeded the coach's plea. Martin finished a driving layup to give Woodland a 21-20 lead coming out of the timeout with 1:48 remaining in the third quarter. Point guard Jared Judkins came up with a steal, drew the foul and hit one of two free throws to extend the lead to 22-20 before Bryson provided the dagger in the closing seconds of the stanza.

Bryson followed Martin's miss with a strong offensive rebound, powered the ball back up and in and drew the foul. He converted the free throw to complete the old-fashioned three-point play and give the Warriors a 25-20 advantage going into the fourth quarter.

"Their size just wore us out," Haley said. "We got tired. They were bigger and stronger than us. When we made a couple of mistakes they cashed in and got the best of us at the end of the game."

BOYS CONSOLATION
DeKalb Middle 53
East Side 19
DeKalb Middle jumped out to a commanding 26-12 halftime lead against East Side and never looked back to win the consolation game of the 2011 WGS Border War Tournament. Austin Brock led East Side with seven points, followed by Kinley Felts with five and Kyle Fults with four.