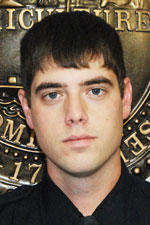 OFFICER BROWN
Serving his community is a routine matter for Chris Brown.

Brown does so every day as a patrolman with the Woodbury Police Department, risking his life every time he puts on a uniform and hits the streets.

Over the last few weeks Brown has been going the extra mile for the people of Woodbury and Cannon County, serving as one of the officers providing security at the Cannon County Election Commission Office during the early voting period for the August 5 County General Election and State Primary.

Doing so has meant spending several hours sitting out in the heat as temperatures soared over 100 degrees on some days.

Voting is another important way for citizens to serve their community, and Brown did that as well around noon Saturday. In fact, he was the last person to cast their ballot during early voting.

"It (being the last person to vote early) has been my goal," Brown said.

As of Saturday, a total of 1774 Cannon Countians had voted. That number includes absentee ballots in addition to early voters.

While that number represents around 20 percent of the little over 8,000 registered Cannon County voters, it is still less than Administrator of Elections Stanley Dobson had wanted would take advantage of the opportunity to vote early.

"We had a few minor problems here and there but everyone does and that's to be expected," Dobson said. "I would like to thank all of those who voted early for their patience and understanding. The people treated us well, and we hope they feel we treated them well. If anyone feels we treated them poorly I apologize."

Broken down by party affiliation, 722 Republicans and 655 Democrats voted early. The total of declared voters is 1509, less than the 1774 overall because persons who voted only in the County General Election and not the State Primary were not required to declare a party allegiance.

Now the process moves to Thursday, when polling places will be open throughout the county from 7 a.m. to 7 p.m. Anyone who is standing in line at one of the precincts will be given the opportunity to vote, Dobson said.

Party On The Square: Tradition Returns To Election Night

WBRY AM/FM and the Cannon Courier are sponsoring an election night party on the newly renovated Cannon County square.  The event starts at 7:00 p.m. on election night, August 5th, and runs until the votes are counted.

“With the completion of the courthouse square renovation project, it seems like a good time to begin a new edition of an old tradition,” said Doug Combs, owner/manager of WBRY.  The ballot has a large number of candidates.  However, many believe that all races could be determined at the county level by 9:00pm.

Many candidates are planning their own parties for that night, according to a few local restaurants.  The party on the square will be for everyone, a chance to join your neighbors and friends to hear their votes count.

Popcorn and soft drinks will be provided by WBRY AM/FM and the Cannon Courier.

Win or lose, all candidates are welcome to stop and be part of the party.